Individually crafted in satin-finished titanium with two attachment units at 3 and 9 o’clock treated with a black DLC (diamond-like-carbon) coating, and a black ceramic bezel to offer superb scratch resistance, the Oktopus II Titanium Yellow features yellow accent on the dial and a big date in double wheels, powered by a highly finished Dubois Dépraz custom-made automatic movement for enhanced readability.

The Oktopus II represents a technical and ideological advancement of the original Oktopus. The brand new and innovative case construction of the Oktopus II benefits from our extensive in-house knowledge in crafting highly sophisticated dive instruments, which sets us apart from any other watch company. The combination of the Oktopus II and the Reef reflects our philosophy that “time should be read analogue while performance should be measured digital”.

The Oktopus II Double Date features a central movement chamber within the case and four case parts assembled together with 16 screws. Eight screws seal the fixed bezel with the chamber and another eight inside the back-case. The housing containing the movement is constructed for maximum resistance against water. The four case parts at three, six, nine and twelve o’clock, are built separately from the movement chamber and are used to hold the strap as well as to carry the attachable instrument.

The construction was inspired by an air-tight pressure chamber used in our lab for diving simulations and testing for both the Oktopus II and the Reef. All the screws comprise of laminated tension discs to tighten and reinforce the construction. The whole surface of the case undergoes a microbillé and a satin finish to reflect light or shadow. The robust crown at 3 o’clock bears an engraving of an octopus symbol. The back case has been decorated with an octopus drawing by Morten Linde, as a reference to an earlier series – the Oktopus Tattoo. The Oktopus II intentionally does not have a turning bezel as the information (time spent submersed) traditionally measured by a turning bezel is available in the Reef. We chose to use titanium, gold and ceramic, as these precious materials are some of the least reactive available and highly anti-corrosive against sea water.

The dial of the Oktopus II is built in two layers. The upper level is cut out in a stencil technique, inspired from the graffiti art. Bearing the Linde Werdelin logo and indexes 3,6 and 9 in superluminova, together with the big calendar wheels, the dial displays an octopus icon. The lower dial is made with a circular Cote de Genève dial to give the effect of water ripples. Two laser-cut wheels at 11 and 1 o’clock are powered by the big calendar complication.

As you can see in the pictures, this watch is very versatile. Both the Black Rubber and Leather with Yellow stitching go great and is in stock and available for this watch. 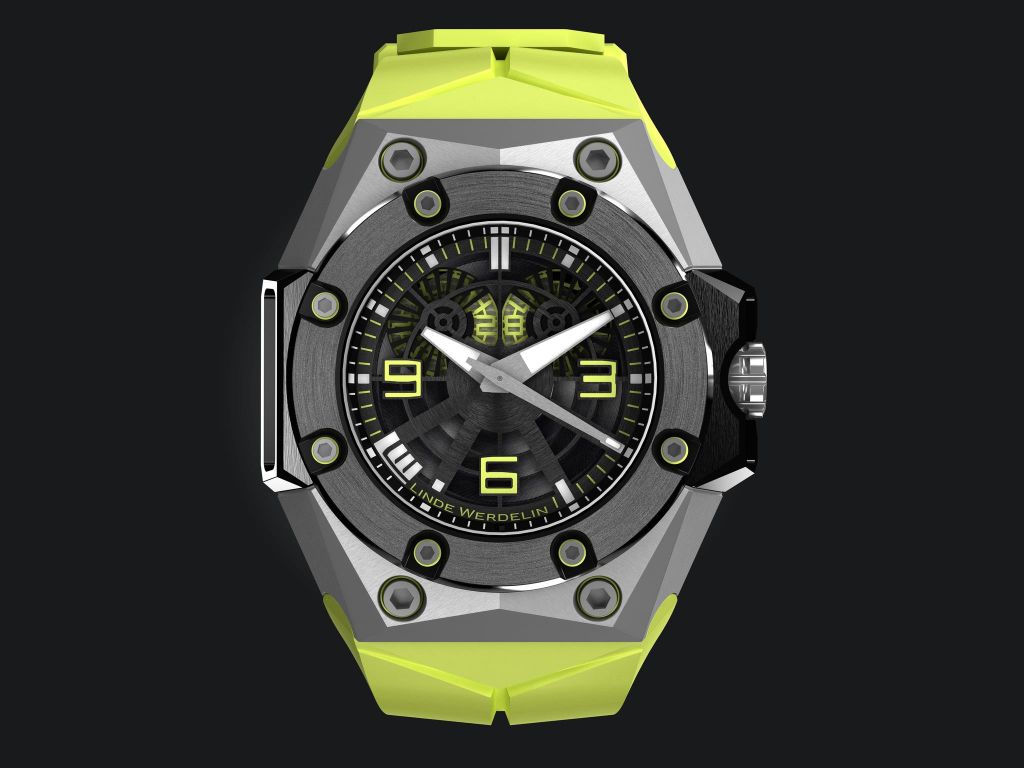 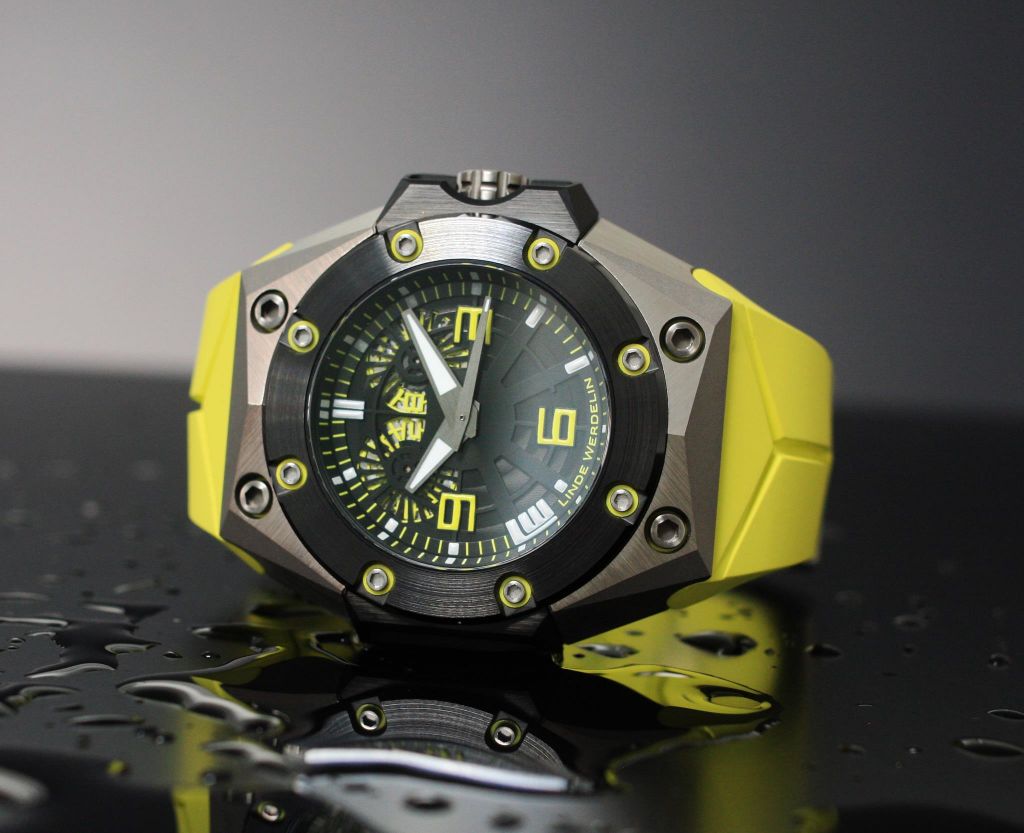 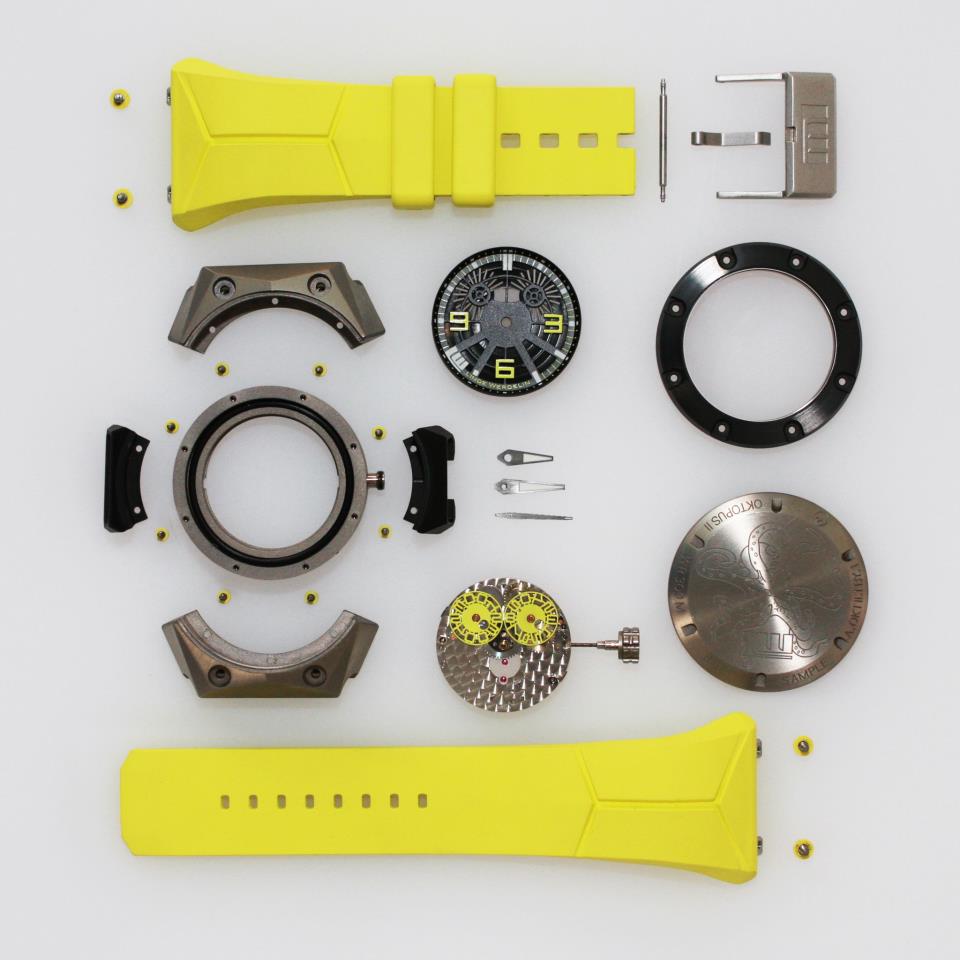 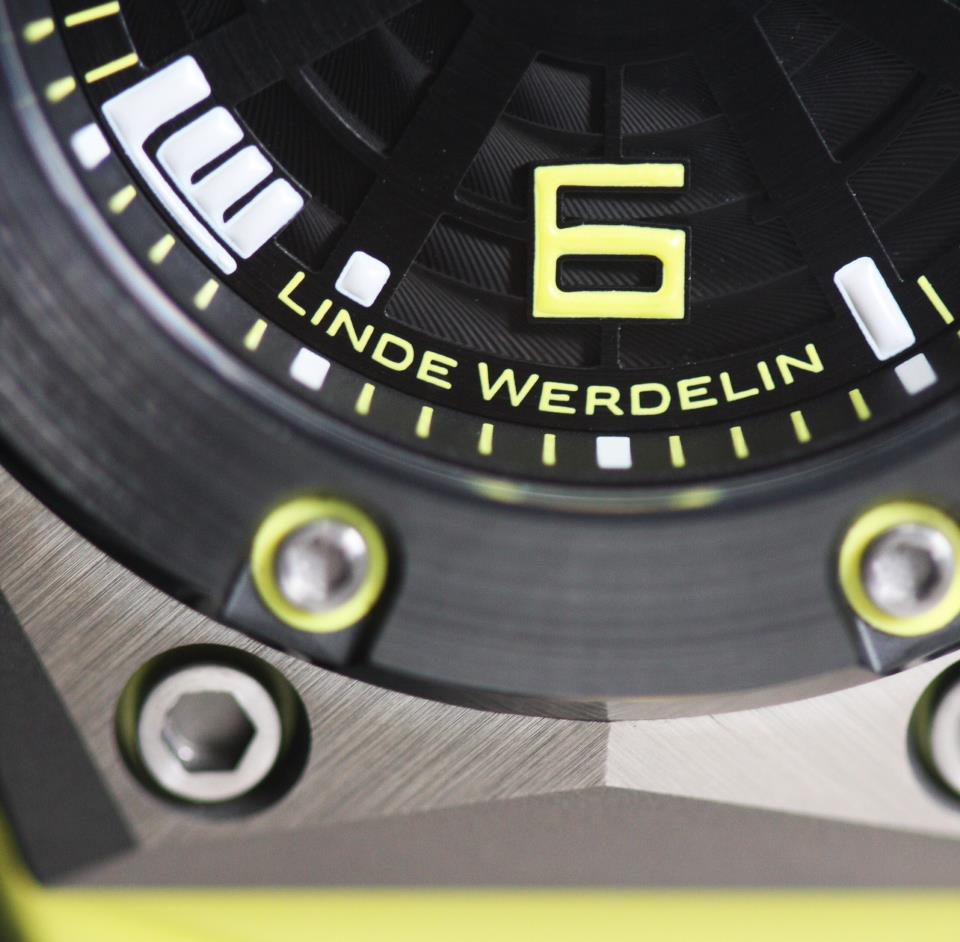 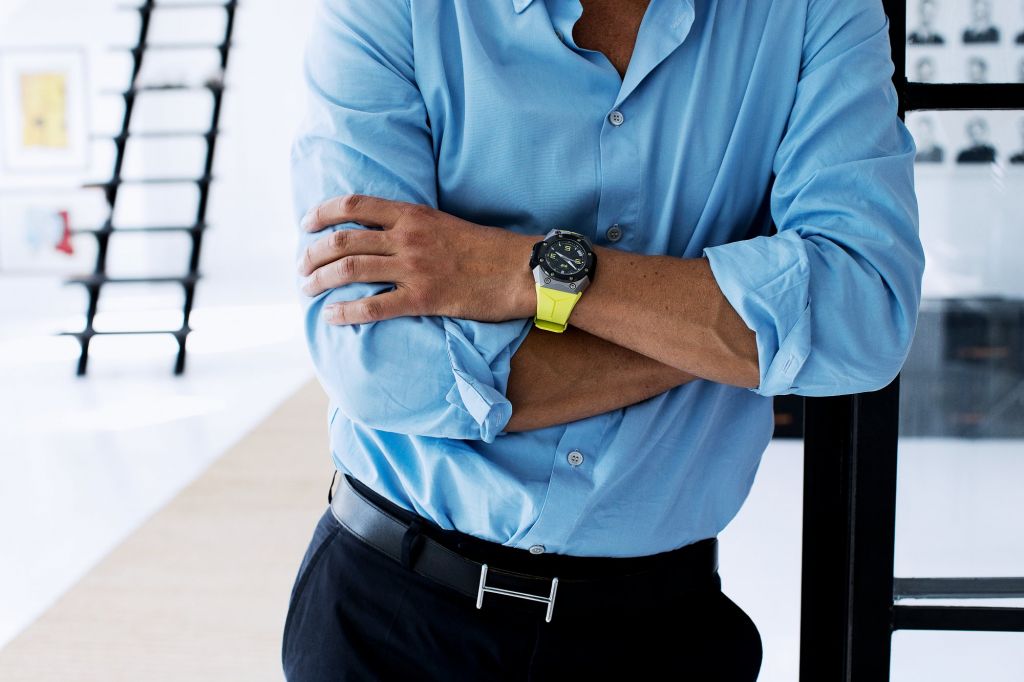 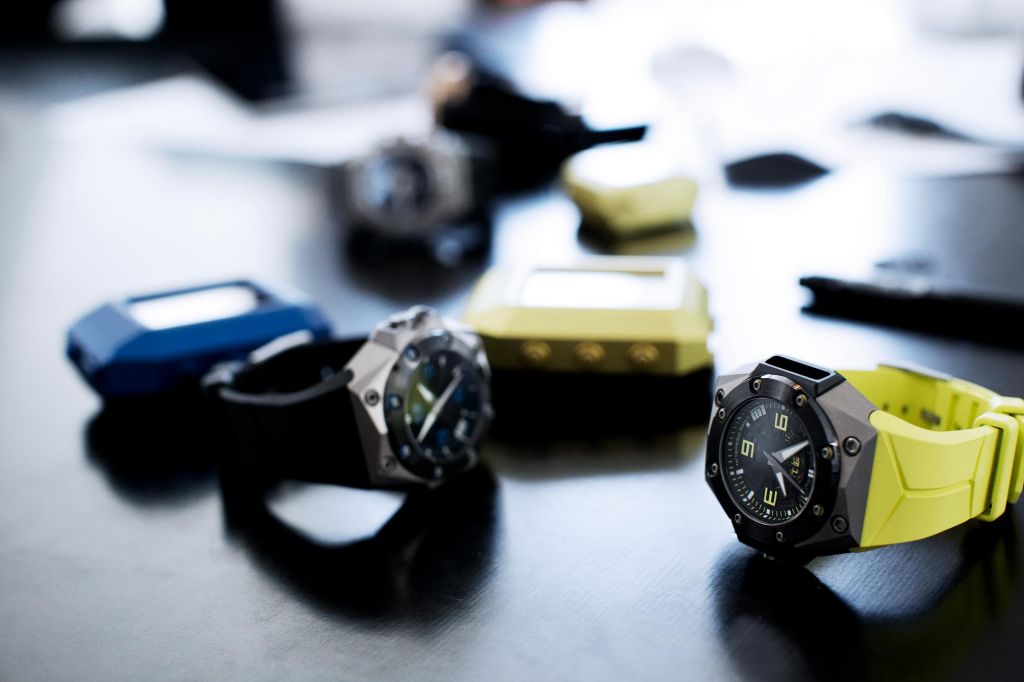 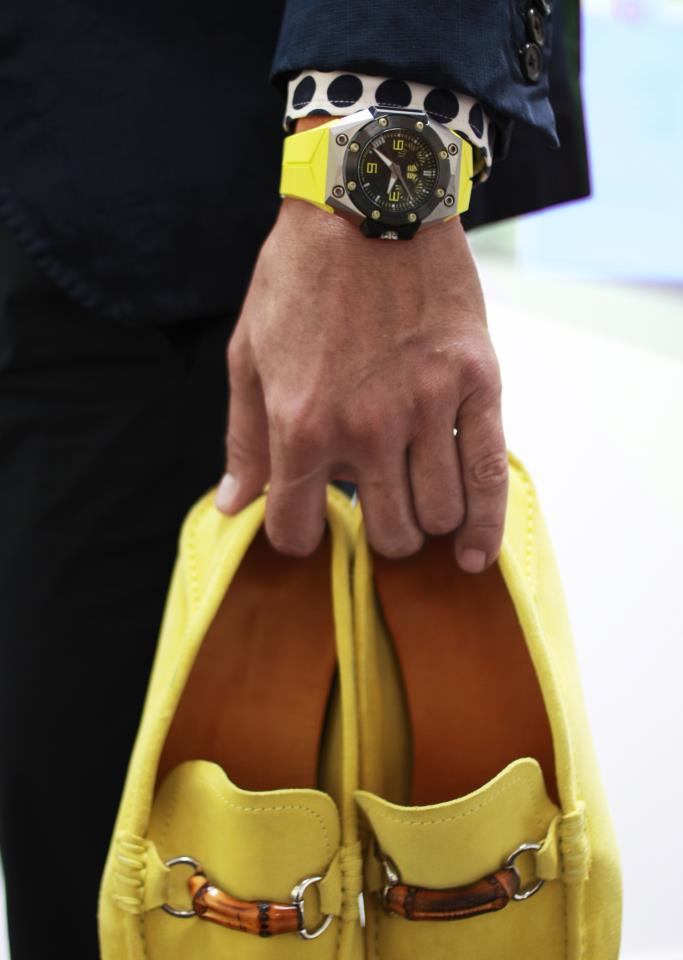 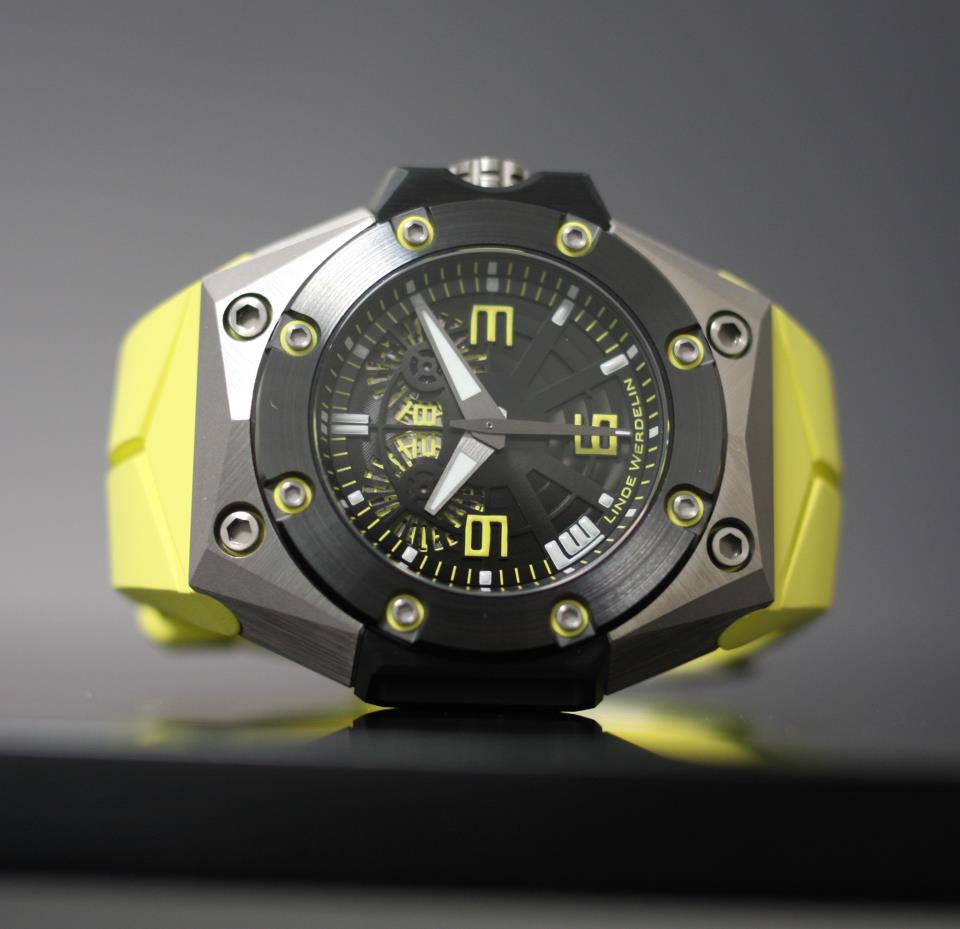 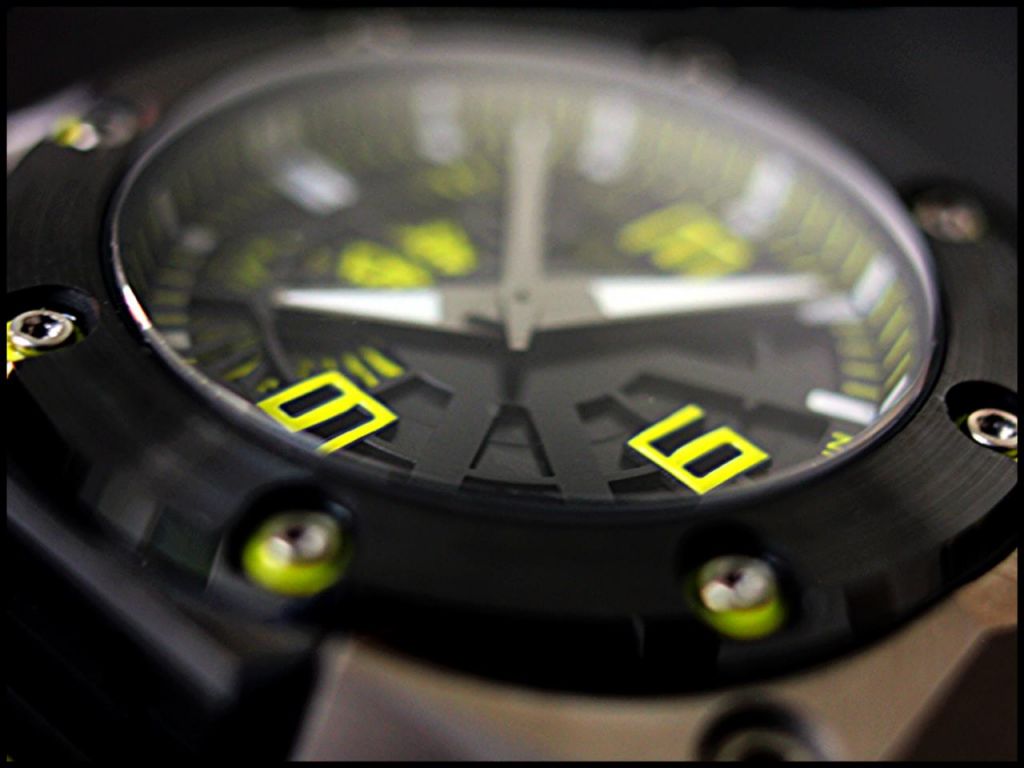 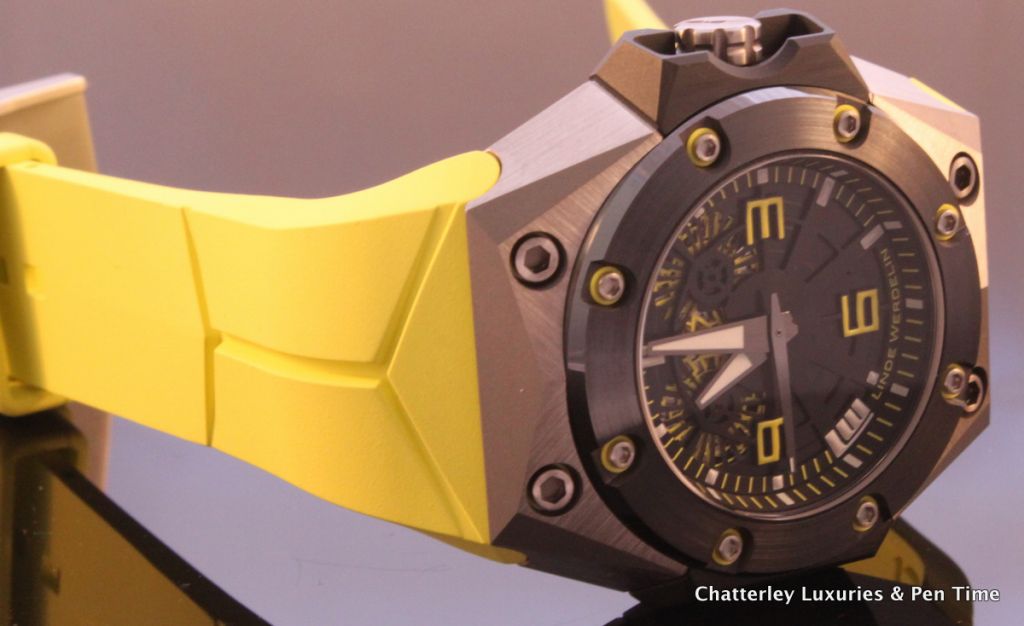 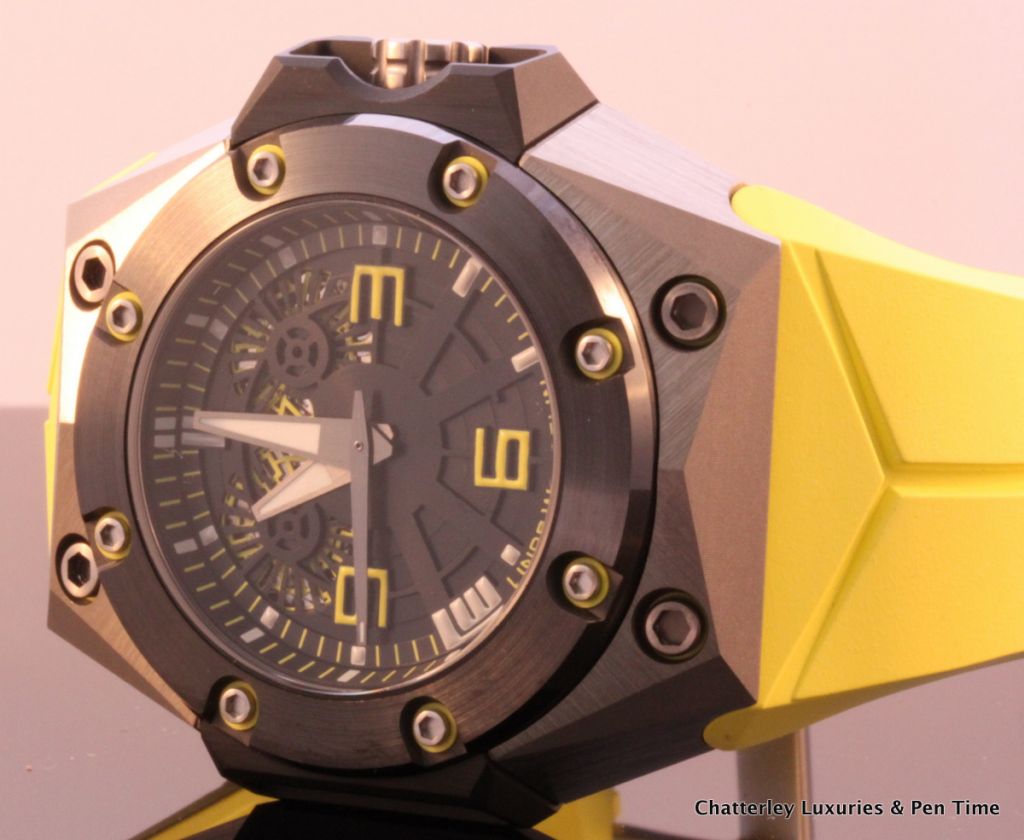 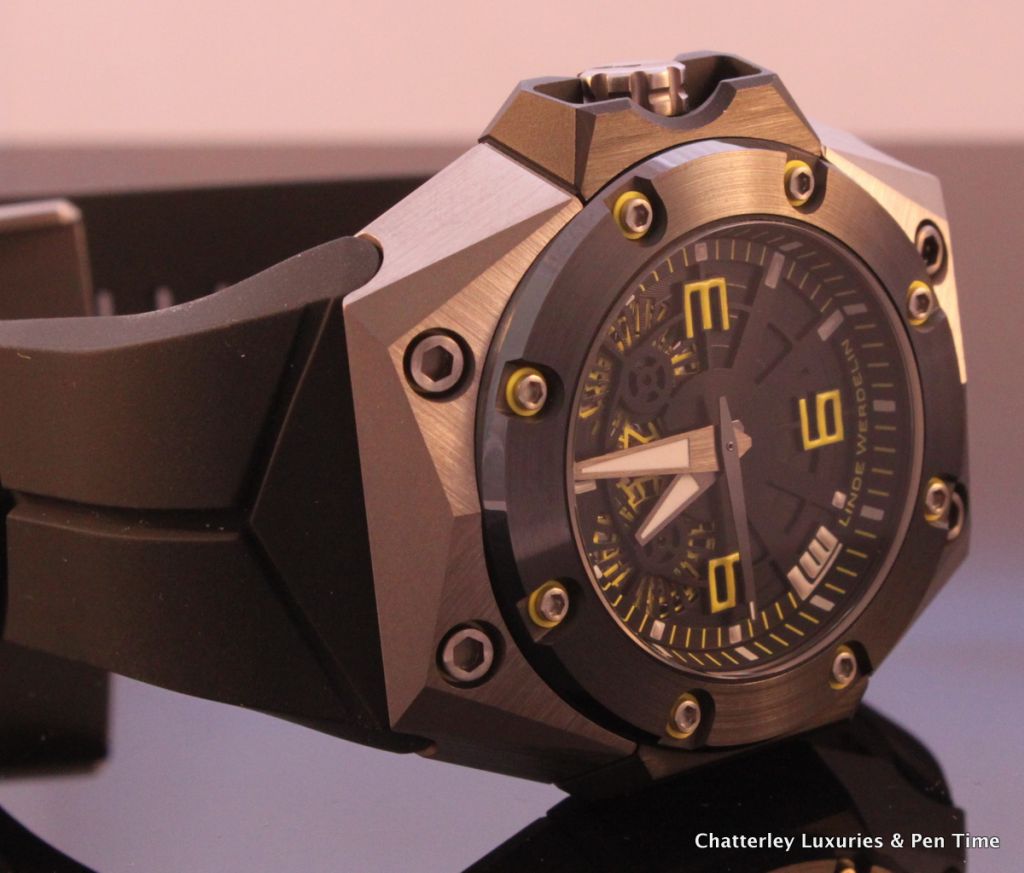 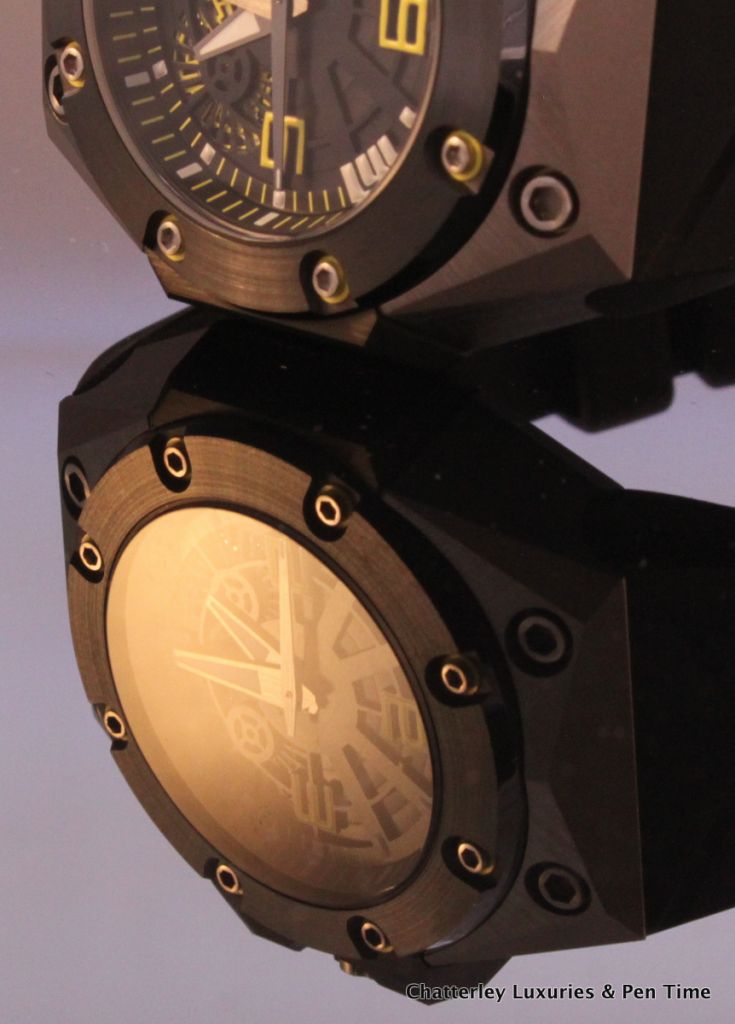 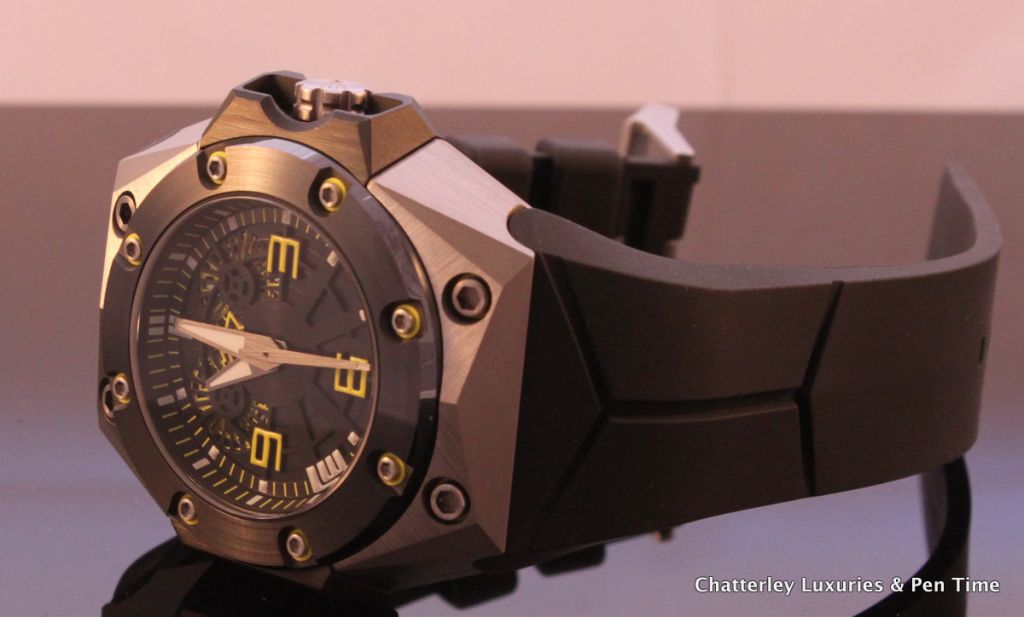 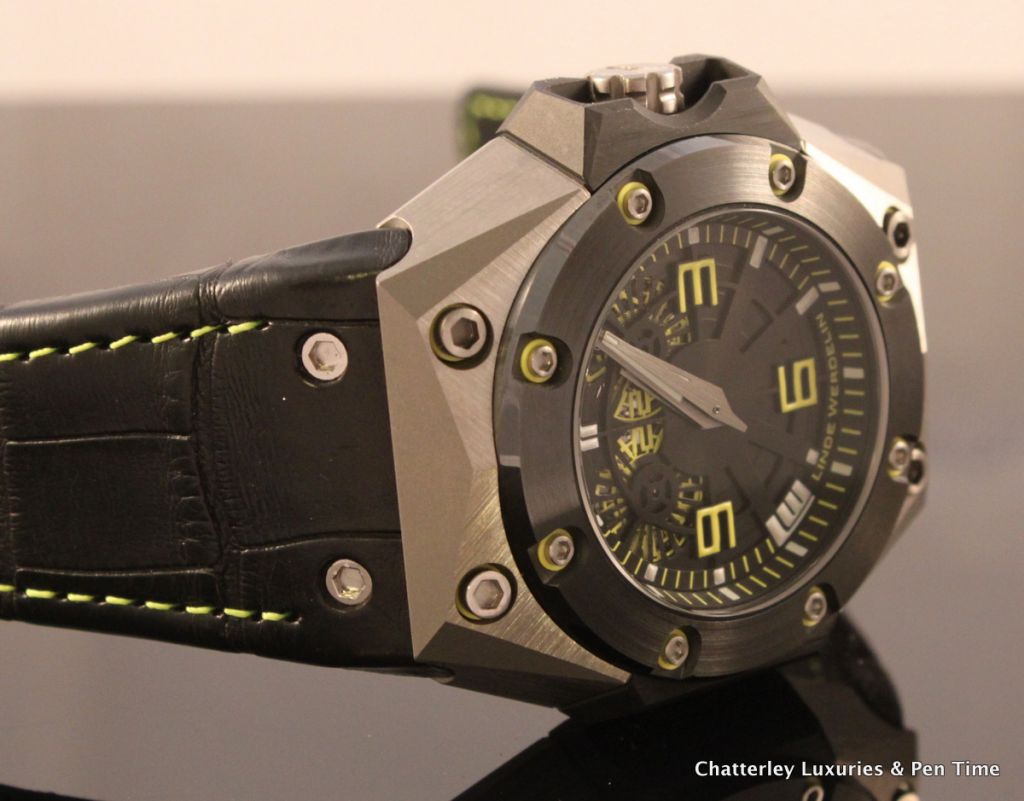 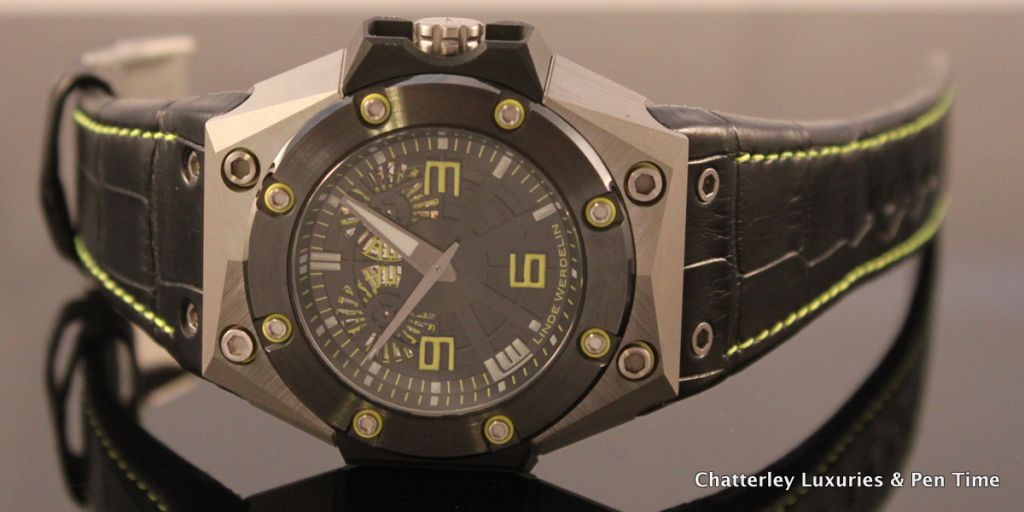