NOTE: Actual pictures of the watch are pictures of samples that we received just for pictures. The watches we have in stock are brand new, never worn and in mint condition.

These watches also come with an amazing Watch Winder. Not every Visconti watch will come with a winder, but these are their first watches and for their 25th anniversary.

The Manufacturers suggested retail price for this watch is $5950. Contact us directly for pricing at info@chatterleyluxuries.com 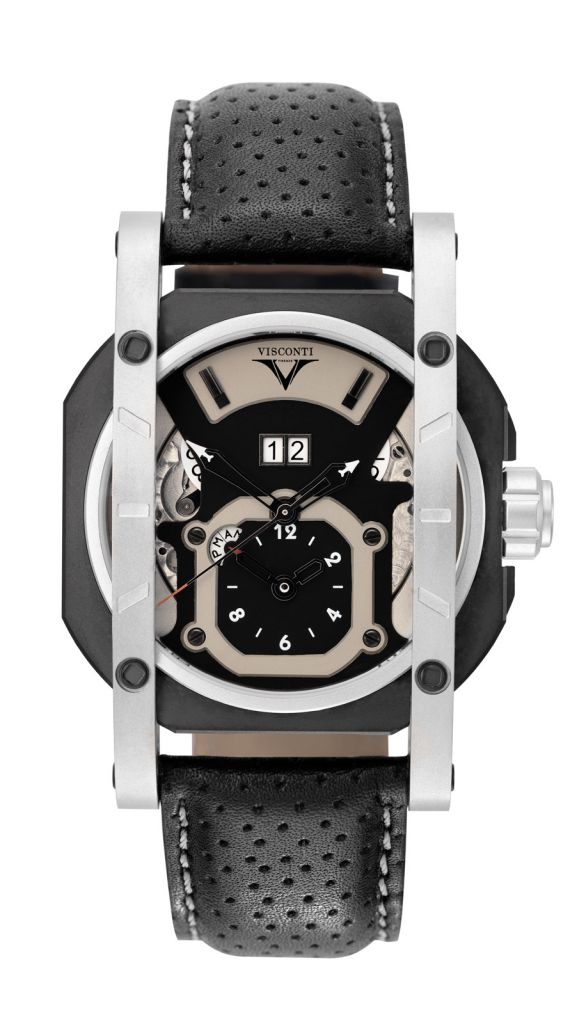 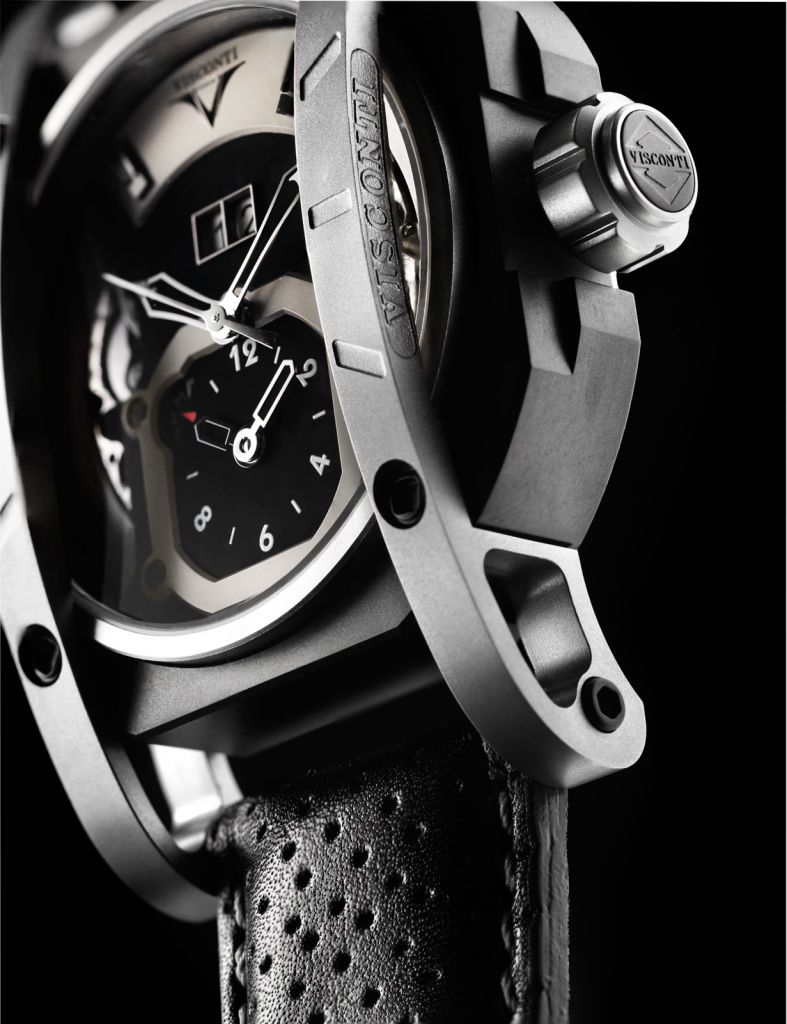 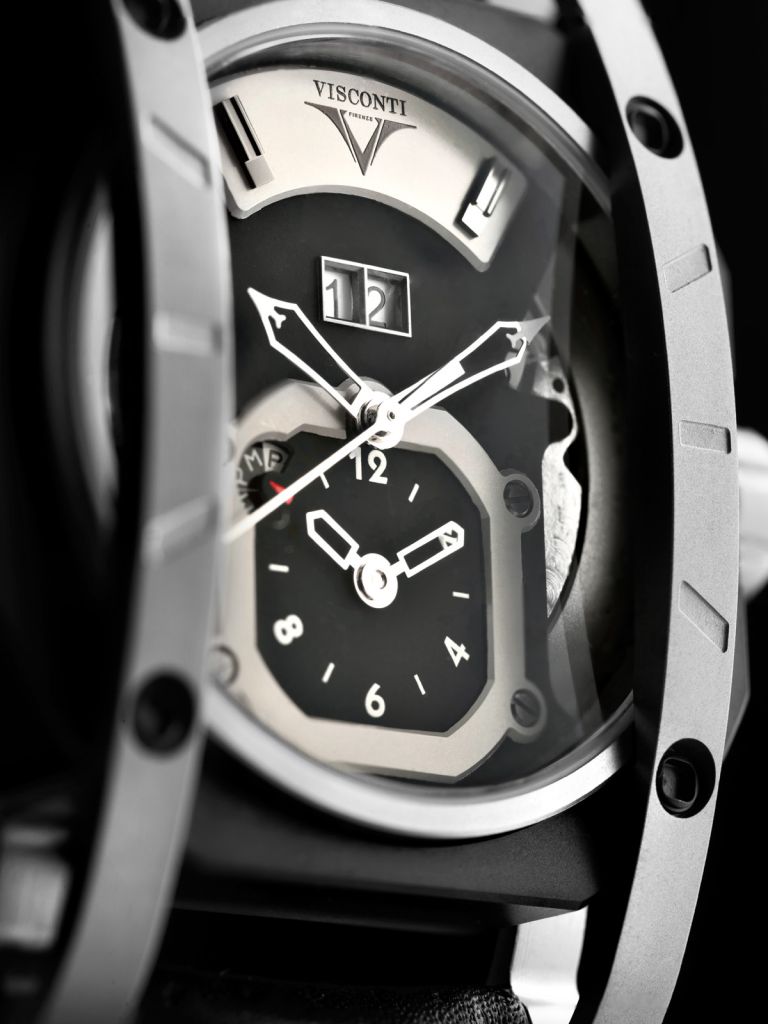 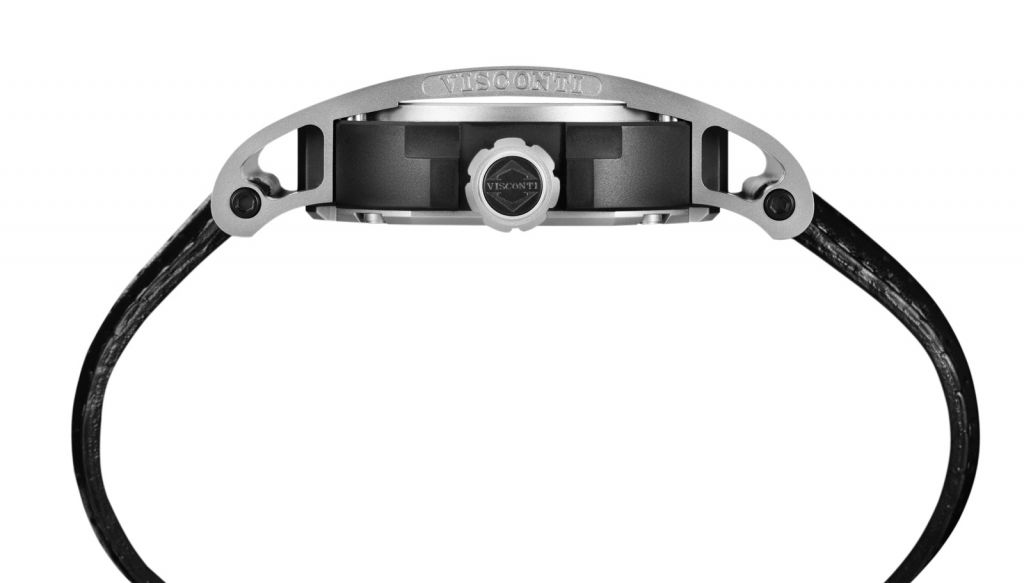 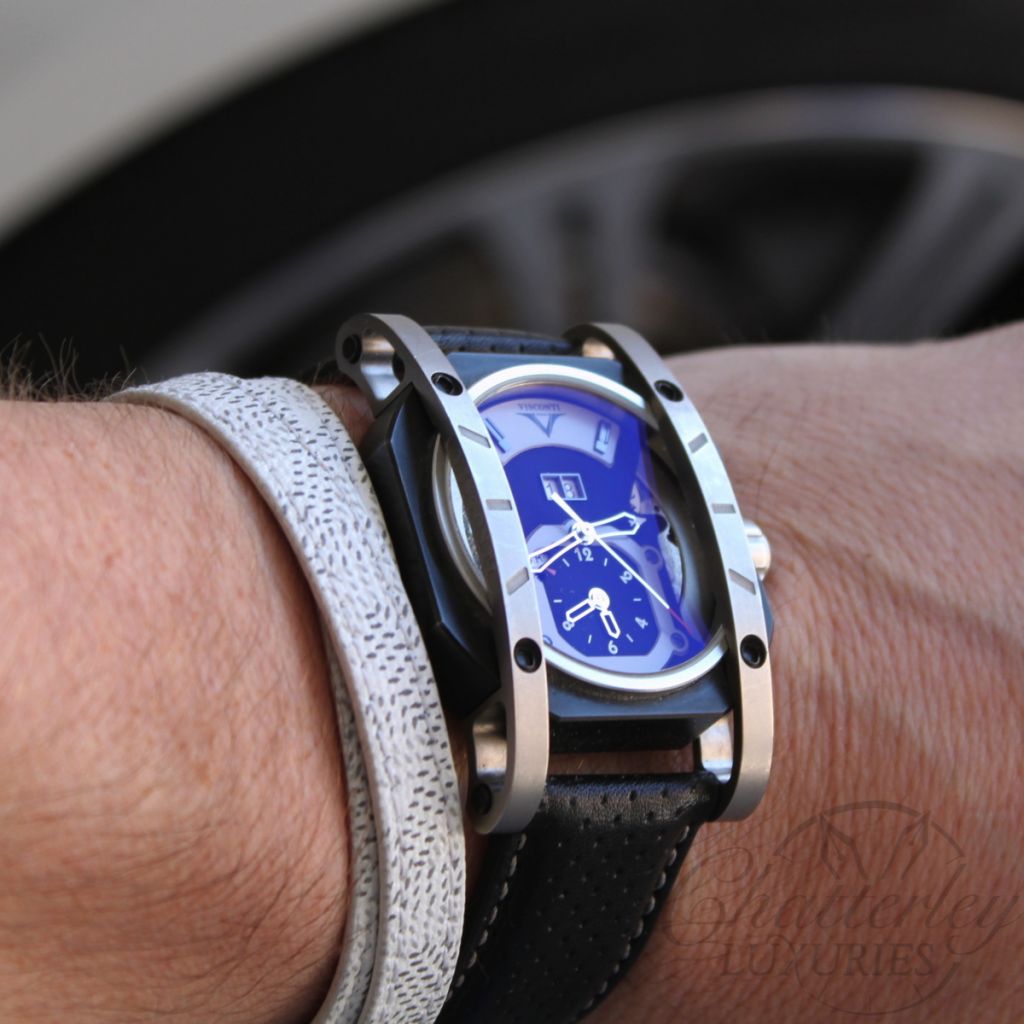 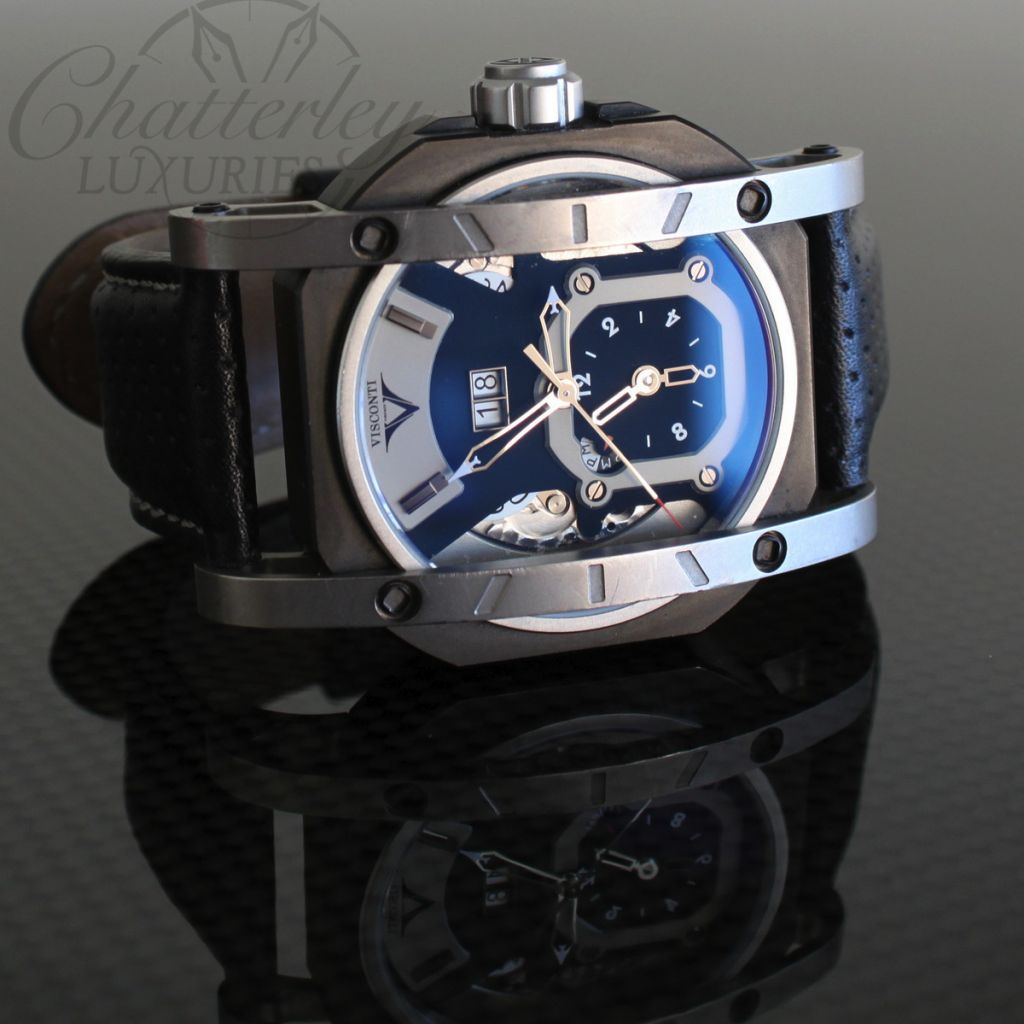 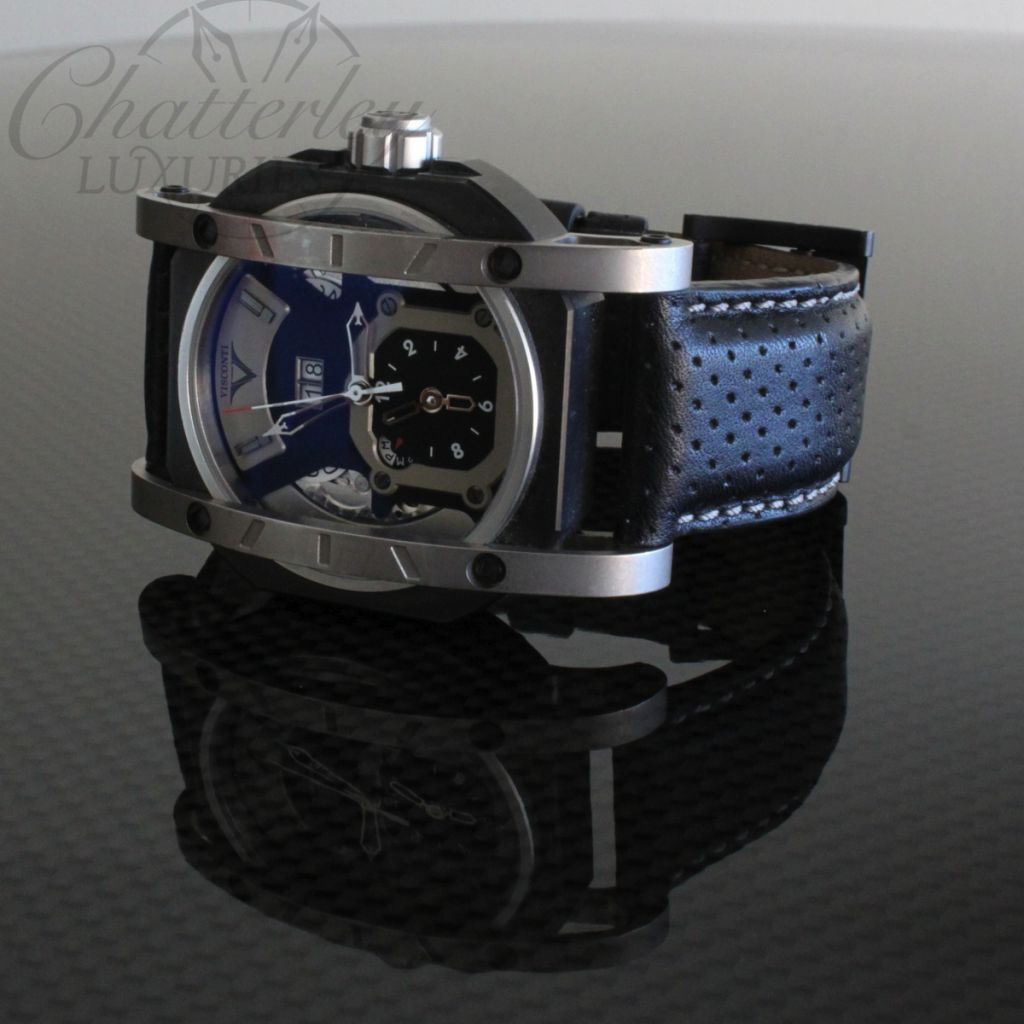 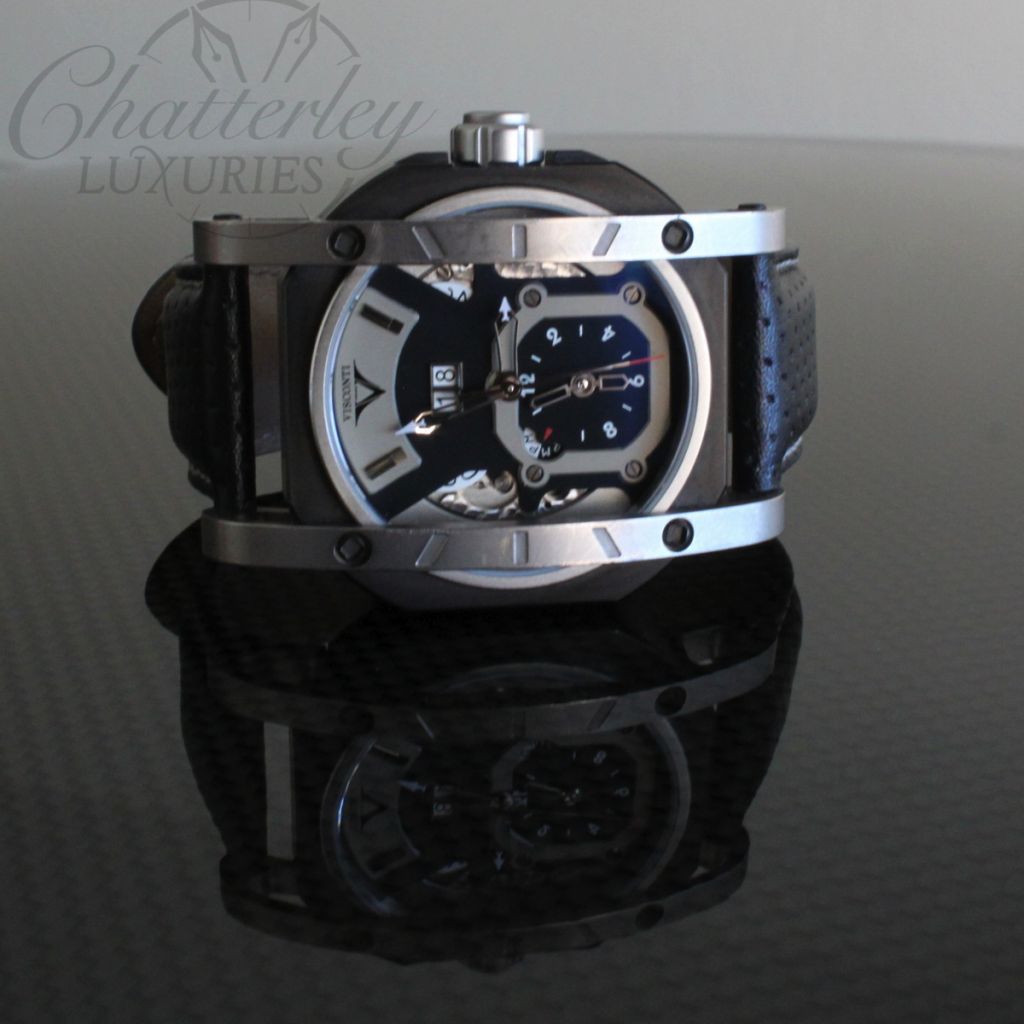 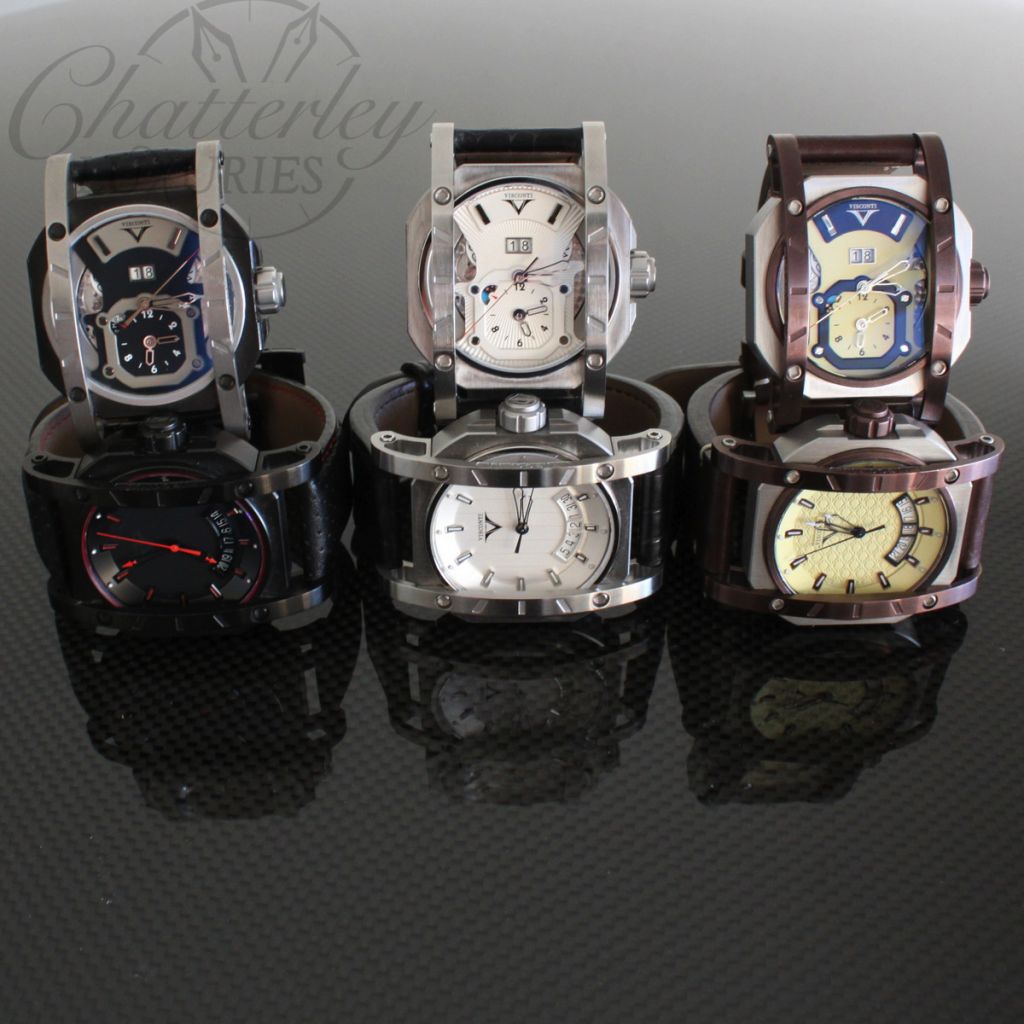 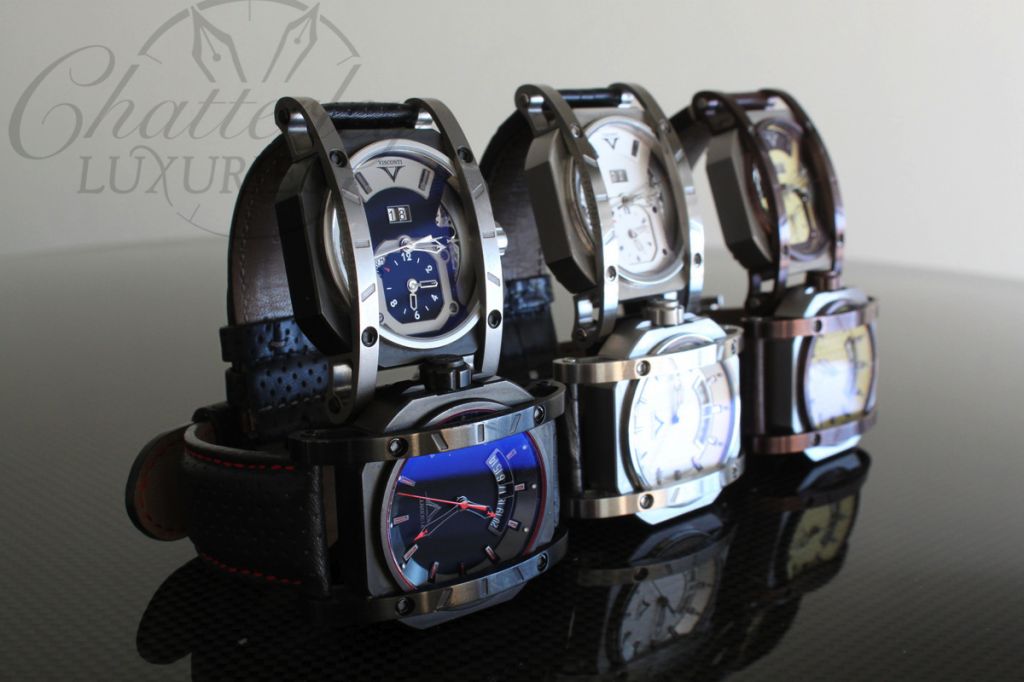 Florence is a universally acknowledged synonym for culture. Humanism and the Renaissance have marked the city’s history, pegging it to the names of artists known throughout the world, men of the caliber of Giotto, Brunelleschi, Leonardo and Michelangelo. What is perhaps less well known is the close link between those old masters’ artistic creativity and their interest in what we know today as science and technology, which in their day was part and parcel of man’s all-embracing intellectual achievement. But Florence is also the city of guilds and trades, of craftsmen and travelers, all of whose activities depended to a large extent on the precise measurement of the passage of time. Indeed it comes as no surprise to learn that Florence was one of the first cities in Europe to build a mechanical clock for its citizens’ benefit, installed by Niccolò di Bernardo on the tower of Palazzo Vecchio on 25 March 1353, although another famous Florentine, Dante Alighieri, possibly the first person ever to write about them, must have seen similar clocks when he penned the X and XXIV Canti of his Paradiso .

Building a mechanical clock required not only technical skill in the materials and operations involved but also a knowledge of mathematics and astronomy, thus falling exactly on the borderline between craftsmanship and humanism in the broadest and loftiest sense. Thus Florence was almost inevitably fated to become one of the most important focal points in the construction of clocks in the Renaissance, with Brunelleschi cooperating on the clock for the tower of the Palazzo dei Vicari in Scarperia in1445, with Leonardo studying the escapement system, and with an entire dynasty of clockmakers in the Della Volpaia family. It even has a city street known as Via dell’Oriolo, or Clock Street, dedicated to the tradition, and Palazzo Vecchio contains a Sala dell’Orologio, or Clock Room, named after the timepiece kept there for over a hundred years until the early 17th century. This skill in the construction of clocks and scientific instruments continued until well into the 19th century: one has but to think of the Officine Panerai founded in 1860, which supplied the Italian Navy with its first clock in 1925 right up to the recent sale of the Richemont group’s brand, or of the Officine Galileo, founded by astronomer Giovanni Battista Amici in 1862. More recently, after World War I, the ICO (Industria Casse Orologi) founded in 1939 has been making watch components for over sixty years and complete watches for the last twenty-five. Today, as the trajectory of the Officine Panerai seems fated to repeat itself, with the interruption and dispersal of its legacy of tradition and skill, Visconti is launching an ambitious project for the recovery and enhancement of this unique and distinctive Florentine experience, the latest embodiment of over six centuries of precision mechanics and fine watchmaking, creating a new pole of excellence.

1988 VISCONTI REVIVES THE ART OF WRITING IN FLORENCE

1988 saw the birth of Visconti, the firm that brought writing back to Florence after a period of oblivion lasting over thirty years. The company, under its founder’s guiding hand for twenty-five years, has turned Florentine craftsmanship into a icon of its output accompanying its fundamental values of passion, art and technology. To celebrate this important anniversary, Visconti has picked up the beacon of Floretine heritage. Launching into a new adventure with exactly the same pioneering determination and enthusiasm as it did twenty-five years ago, it has decided to bring watchmaking back to Florence to stand proudly alongside the art of penmanship. Its winning business model is the very same one that it has applied to writing, based on the rediscovery of skills and expertise and the organization of people by motivating them with long-term goals under the artistic and technical guidance of Dante Del Vecchio, and with the benefit of Visconti’s boundless creativity.

THE METAPHOR OF THE BRIDGE

The bridge has been Visconti’s distinctive symbol for over fifteen years: a strongly communicative symbol tightly bound to the principle of transcending the concept of a mere “product” in order to humanize that product and to link it to communication with an intensely intrinsic significance. All of Visconti’s creations are the bearers of a message, of a strongly symbolic story. The bridge is a wonderful metaphor, an arc joining two opposite banks, a smooth, flowing line bringing those banks closer to one another. If man were a builder of bridges rather than a defender of borders, mankind would be a far happier and more advanced species. Bridges are plump and good-natured, they repay you for your effort in reaching their brow with the beauty of the panorama that they offer you from that highpoint and with the effortless enjoyment of walking down their other side.

The oldest of the historical problems with which geometry has been confronted is unquestionably the squaring of the circle. This problem, which must have occurred to man since time immemorial, can be stated as follows: take a given circle and determine the side of a square with an area equal to that of the circle. While the problem may be easy to state, it most certainly cannot be solved in an elementary way merely by using a ruler and compass. In fact, squaring the circle has become a synonym for achieving the impossible. The circle is a sign of the unity of the beginning and of the unity of the sky, and in that capacity it points to its activity and to its cyclical movements. The cyclical movement is perfect, unchanging, with no beginning, no end and no variation, thus making it the ideal symbol of time which, in turn, may be defined as a constant, unchanging succession of moments each one of which is identical that which went before it and to that which will come after it.

The square is the symbol of the earth, as opposed to the sky, but it is also the symbol of the created universe, of earth and sky together, in opposition to the uncreated universe and to the creator; it is the antithesis of the transcendent. The square is an anti-dynamic figure anchored on its four sides, representing frozen motion, the moment in isolation. The squaring of the circle expresses two laws of creation and maintenance of the universe: movement and stability, innovation and tradition. The squaring of the circle translates for Visconti into a new form fusing in a single geometric figure both the circle(time) and the square (production), or any of several other meanings that one might wish to assign to it: innovation coupled with tradition, movement with stability, and so forth .

Visconti’s twenty-five years on the scene represent a story pregnant with meaning, a search for excellence that has allowed the brand to build up a solid reputation as the creator of truly unique writing instruments. But tradition should never lead to closure or to immobility, to the mere repetition of successful styles; thus it is with the courage of innovation based on the measure of its heritage that Visconti today has decided to celebrate its anniversary with a totally new instrument: the watch.Visconti has designed a watch in which its brand symbol, the bridge, crosses and safe guards time, stretching from the history of clockmaking in Florence to the present day and Visconti’s determination to rediscover that legacy. One of the most impossible forms, and possibly for that very reason one of the most fascinating to have been forged by Visconti’s creative vein, is the squaring of the circle, and it is this that frames and encapsulates the endless flow of time – time surmounted by two bridges between the pieces of the strap and measured by hands that echo the nibs of its fountain pens. Visconti has turned leading edge technological research into a tool bringing Florence’s Renaissance heritage right into the modern era, and its Anniversary Watch is a perfect fusion of aesthetic perfection and technological innovation with its traditional three piece construction – bezel, middle and bottom plate – typical of the best watchmaking, yet renovated thanks to the structural use of its aesthetic and stylistic components. The two bridges do not simply fix the watch to the strap, they are also the parts which ensure that the bezel is kept firmly in place and is perfectly watertight, thus transcending their purely aesthetic function. The watch comes in two versions, one that displays only the time and date, which is aptly named Up to date, and one that displays two time zones, which is called GMT. They are both made in Italy but their movements are Swiss-made and of the highest quality. Each version is available in three different variants: Elegance, Image and Sport, which differ in their design, in the materials used (only the purest steel and titanium), in their finish and in their PVD treatment. Each variant is individually numbered and produced in a limited edition of only 250 pieces, a multiple of the twenty-five years that Visconti is proud to be celebrating. A watch that marks the meeting point between time and writing, between the pen and the watch, the only universally acknowledged jewels for a man.