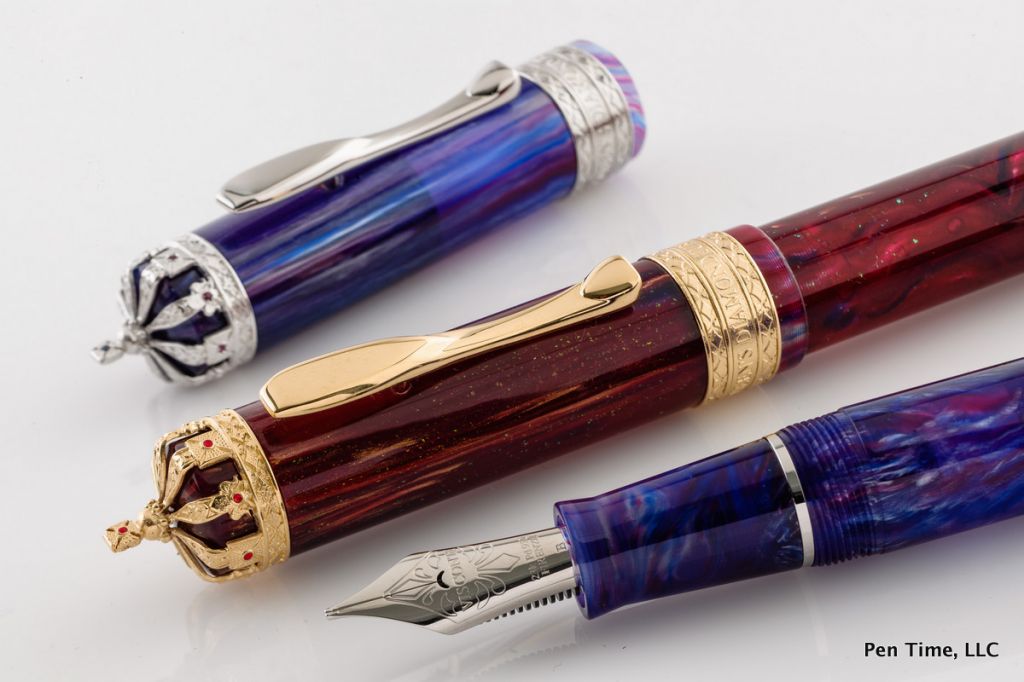 THE VISCONTI DIAMOND JUBILEE: AN INTERNATIONAL CELEBRATION OF ROYALTY, HERITAGE AND EXCELLENCE.

It is a pleasure to announce Visconti has been chosen as official partner to celebrate at the same time both the HM Queen Elisabeth II 60° Anniversary Diamond Jubilee and the 175° Anniversary of the Army & Navy Club. Army & Navy club is the most prestigious, ancient and exclusive club in London founded in 1837 by Lieutenant General Sir Edward Barnes. The club has its headquarters in London, Washington DC. and New York.

This item is set up with a medium nib, other nib grades available by request. Email directly for more information.

To launch the celebrations, there will be a high profile society event celebrating the Diamond Jubilee and 175 years of the Club, held at the Club’s HQ in Pall Mall, attracting press and PR from titles such as Tatler and Harper’s Bazaar. The champagne reception will be attended by celebrities and society figures and will cement partners’ reputations as ones of esteem, luxury and distinction. A charity auction will take place during the event, to raise money for the Red Cross, which has helped millions of soldiers, at home and abroad, in times of war. As President of the charity, HM The Queen also celebrates her 60 years of support for the cause. Other attractions at the launch event will include wine tasting.

In the past year, the British Royal Family has become one of the world’s most influential brands. International news stories on the Royal Wedding of The Duke and Duchess of Cambridge reached seven million per day in 2012, with the event itself watched by 2.4 billion people across the world. The British Monarchy – as a symbol of tradition, excellence and strong values, as well as style, glamour and sophistication – has become a media phenomenon. Today, the royals are closely associated with such fashion brands as Alexander McQueen, Vivienne Westwood, Louis Vuitton and Rolex, and supported by the most powerful market leaders across the world’s top global industries, including oil (Royal Dutch Shell, Chevron, ConocoPhillips), diamond (Graff Diamonds, Chopard), luxury automobile (Bugatti Veyron, Lamborghini, Rolls-Royce, Bentley), top auctioneers (Sotheby’s, Christie’s), leisure (The Ritz, The Dorchester) and financial services (Goldman Sachs, Rothschild, Deutsche Bank). We have entered the new generation, in which regal distinction is the world’s most influential trademark.

With an elite following, it is little wonder that royals from every country across the globe are linked to the world’s most prestigious Private Members’ Clubs. Among them, the Army & Navy Club is one of the oldest and most famous international private clubs, with headquarters in London, Washington DC and New York. Indeed, its affiliation with 135 reciprocal associate clubs carries its reputation overseas to the major cities of every continent, including London, Paris, Brussels, New York, Hong Kong, New Delhi, Tokyo, Kuala Lumpur, Penang and Singapore; as well as Ottowa, Buenos Aires, Cape Town, Cairo, Auckland and Victoria. Among these prestigious clubs are elite names such as The Carlton Club, The Hurlingham Club, Lansdowne Club, Oxford and Cambridge Club, The Tanglin, The Tokyo American Club and The Dehli Gymkhana.

With the London 2012 Olympic and Paralympic Games, and Her Majesty The Queen’s Diamond Jubilee taking place in the summer of next year, the countries of the world are coming together, with London as their worthy host for 2012.

Visconti Limited Edition Fountain Pen: 600 Pieces in royal purple color and platinum plated trims. Enriched with dedicated band and decorated with the reproduction of the royal crown. This beautiful Fountain Pen is offered with the Visconti exclusive unique most precious nib: the famous 23Kt Pd dream touch nib, the MSRP on this pen is $995.

Limited Edition Fountain Pen: 600 Pieces in imperial ruby color and gold plated trims. Enriched with dedicated band and decorated with the reproduction of the royal crown. This beautiful Fountain Pen is offered with the Visconti exclusive unique most precious nib: the famous 23Kt Pd dream touch nib, the MSRP on this pen is $995.

Regular Edition Roller Ball Pen: specially created from Visconti with a beautiful royal purple material enriched with some platinum dust inside. Dedicate platinum plated band, the MSRP on this pen is $345.

Regular Edition Roller Ball Pen: specially created from Visconti with a beautiful imperial ruby color material enriched with some gold dust inside. Dedicate gold plated band, the MSRP on this pen is $345.