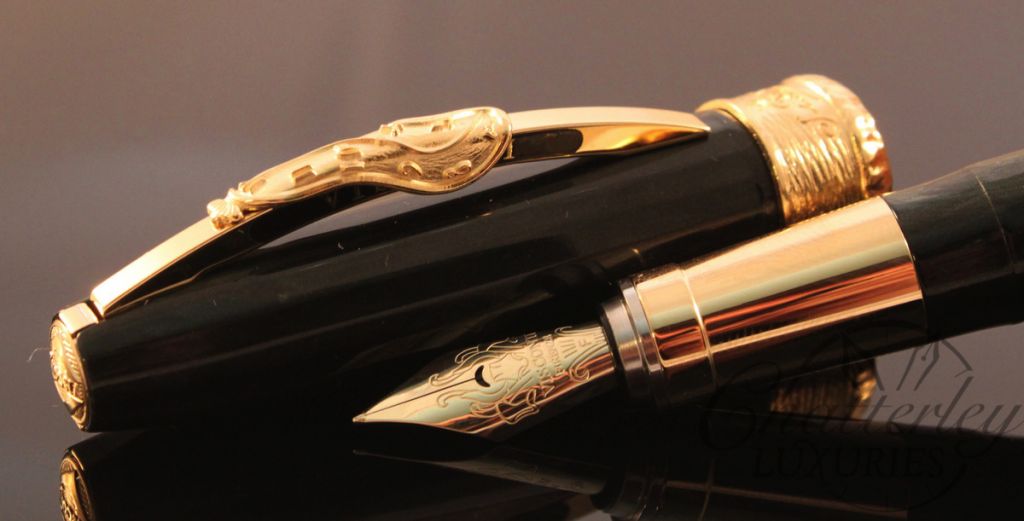 Visconti of Florence, Italy is known for always being on the forefront of new fountain pen designs, which is why it was attracted to Salvador Dali. Dali, considered by many to be one of, if not the greatest painter of the 20th Century, was known for his own leading edge work.

The beginning of 2013 marked the inauguration of a Salvador Dalí exhibition in one of Florence’s finest buildings, the Palazzo Medici Riccardi, and so it came almost naturally to Visconti to create a surrealist pen dedicated to the artist. The pen is taken from an image by Salvador Dalí, “The Dance of Time I”©, and the pen rests on another image by Dalí called “The Profile of Time”©, which is transformed into a beautiful pen stand (©IAR Art Resources). Both these images highlight Dalí’s obsession and pre-occupation  with his “melting” clock.

Visconti’s intention was not merely to revive Surrealist imagery but to encapsulate Dalí’s Surrealist endeavour in a space as small as the surface of a pen. The Visconti “The Dance of Time I”© imitates and embodies a number of Dalí’s most important and widely loved themes, including:

The “melting” clock is the best known and best loved of all of Dalí’s iconoclastic images; the omnipresent fluidity of time is shown not only as movement but almost as though it was a dance to the rhythm of the universe.  Universal time knows no bounds; we should remember that time, as it is generally understood, is a concept devised by man.  Dalí’s time, on the other hand, is perpetual, it “moves forward in a dance” without ever stopping either for man or for history, indeed not even for the cosmos.  The image depicts Dalí’s deeply fantastical relationship with time, his perception of the limitations that it enforces on us and the importance that the artist assigned to memory.

The regular edition of the collection is what is for sale here. These fountain pens feature the Melting Clock over the iconic bridge clip, and Salvador Dali’s signature. The MSRP on this pen in either Gold or Silver trim is $289