This fabulous feature from AP Limited Editions is inspired by the triptych by Uttagawa Kuniyoshi, one of the greatest masters of the Japanese art style of Ukiyo-e woodblock prints.

Kuniyoshi was versatile in his depiction of many art themes. This depiction is based on a popular Japanese novel written by Santo Kyuden, called the Story of Uto Yasutaka where a giant skeleton appears on the summons of Princess Takiyasha to subdue the conspirators who killed her father.

This popular story is vividly expressed by the skilled Maki-e Artist in this multi-dimensional feature crafted in brilliant Urushi colors and raised, Taka Maki-e and Togidashi techniques.

Takiyasha the Witch and the Skeleton Spectre 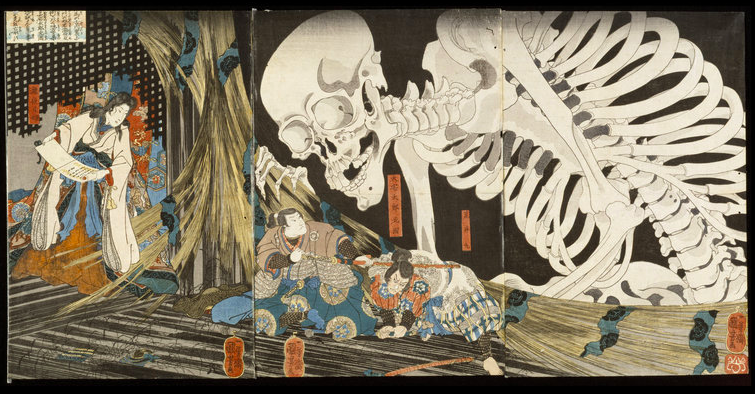 This striking image illustrates the story of princess Takiyasha, daughter of warload Taira Masakado who started a rebellion against the court in Kyoto. As the rebellion failed and Masakado subsequently killed, the ghosts of soldiers who had fallen during the rebellion haunted Masakado’s palace at Soma. This print captures the moment when Princess Takiyasha summons these ghosts and turns them into an enormous skeleton whilst Oya Taro Mitsukuni, who is sent by the emperor to hunt down the remaining allies of Masakado, faces fearless with the skeleton and eventually defeats the plotters.