This pen is lovingly used and comes with its original box. It has a Medium nib. It also come with the Rollerball Section, so you get 2 in one with pen. 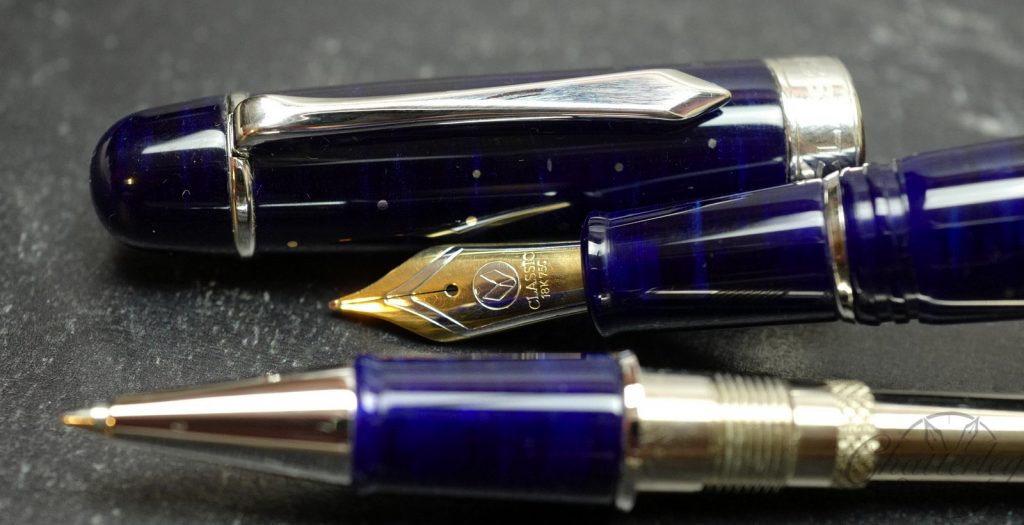 The LB3 Jupiter is an exquisite inlay design of the planet, its four main moons and the heavens at night. It is handcrafted by the multi-talented artist Paul Rossi, to the demanding quality standards of Classic Pens. The canvas for this exclusive design introduces the Legend™ pen. Legend™ is a Classic Pens trademark. It is the very first pen model developed and produced by the company, it marks a new beginning and celebrates the Twentieth Anniversary of Classic Pens.

The materials used for the Legend™ pens and consequently for the LB3 Jupiter, consist of the highest quality acrylics. They are manufactured in England exclusively for Classic Pens. Thin sheets of acrylic are laid on top of one another and then are diffusion bonded to create extremely stable and durable material, unlike any other. Parker used this type of diffusion bonded acrylic in its Mosaic, Pin Stripe and True Blue Duofold Limited Editions, the top acrylic finishes of the Duofold range. The Classic Pens acrylic pearl finishes are Flame Red and Space Blue.

Paul Rossi is a multi-talented artist and craftsman. He began to make things at a very early age, in his native Switzerland, where he received his extensive training. As a teenager, he acquired the finest writing instrument his money could buy. His love of fountain pens blossomed in him the desire to make them. Today, Paul is well known and admired for his handcrafted pens, which are sought by collectors throughout the world.

In 2001, Classic Pens launched five limited edition series of sterling silver overlays. Each series had a unique design and consisted of ten pieces individually handcrafted and numbered by Paul. All the editions sold out, the pens are highly cherished by their owners.

The LB3 Jupiter consists of inlaying both acrylic materials and precious metals into the cap and barrel. The planet itself is represented in Flame Red with its four orbiting moons in white and blue acrylic. There are 21 stars in 18K solid gold, inlaid in three constellation formations, 7 stars each formation . On either side of the clip, are Big Bear and Little Bear with Orion on the barrel. Finally, small sterling silver stars are inlaid artistically to complete the night sky surrounding the planet.

Note the work on the cap and barrel above, in diffusion bonded Space Blue, with Jupiter in Flame Red, and the Big Bear constellation in 18K solid gold stars.

The LB3 Jupiter was launched in 2007. The series comprises a total of 100 Legend™ pens in a choice of fountain pen or rollerball/ballpen writing modes. The fountain pens use the cartridge/converter system. They are fitted with 18K solid gold, two tone nibs in Fine, Medium, Broad, Fine Italic and Broad Italic. The nibs carry the Classic Pens graphics.

The pens are housed in an elegant gift box and are accompanied by a Certificate of Authenticity and Lifetime Warranty.

The LB3 Jupiter Art Pens are handcrafted by Paul Rossi. It requires a minimum of 10 hours to complete each inlay design. All 100 pens in the series conform to the same poetic theme, but each differs just enough from the others to be truly a distinctive work of art. And Paul likes to remind us “Every LB3 Jupiter pen has a little bit of my soul in it.”