Up for sale is an amazing St. Patrick Fountain Pen. This is an oversized pen for sure. Much thicker than a Montblanc 149. This pen is pre-owned, but NOS (new old stock) with a Medium 18k nib. 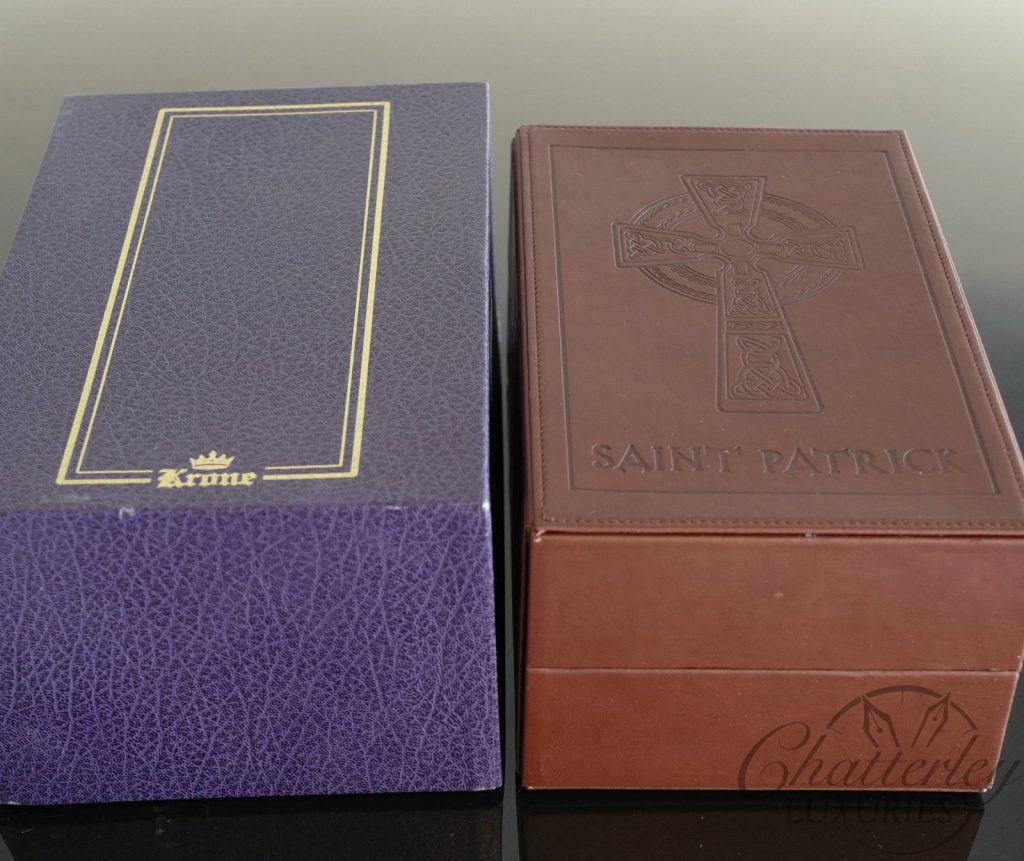 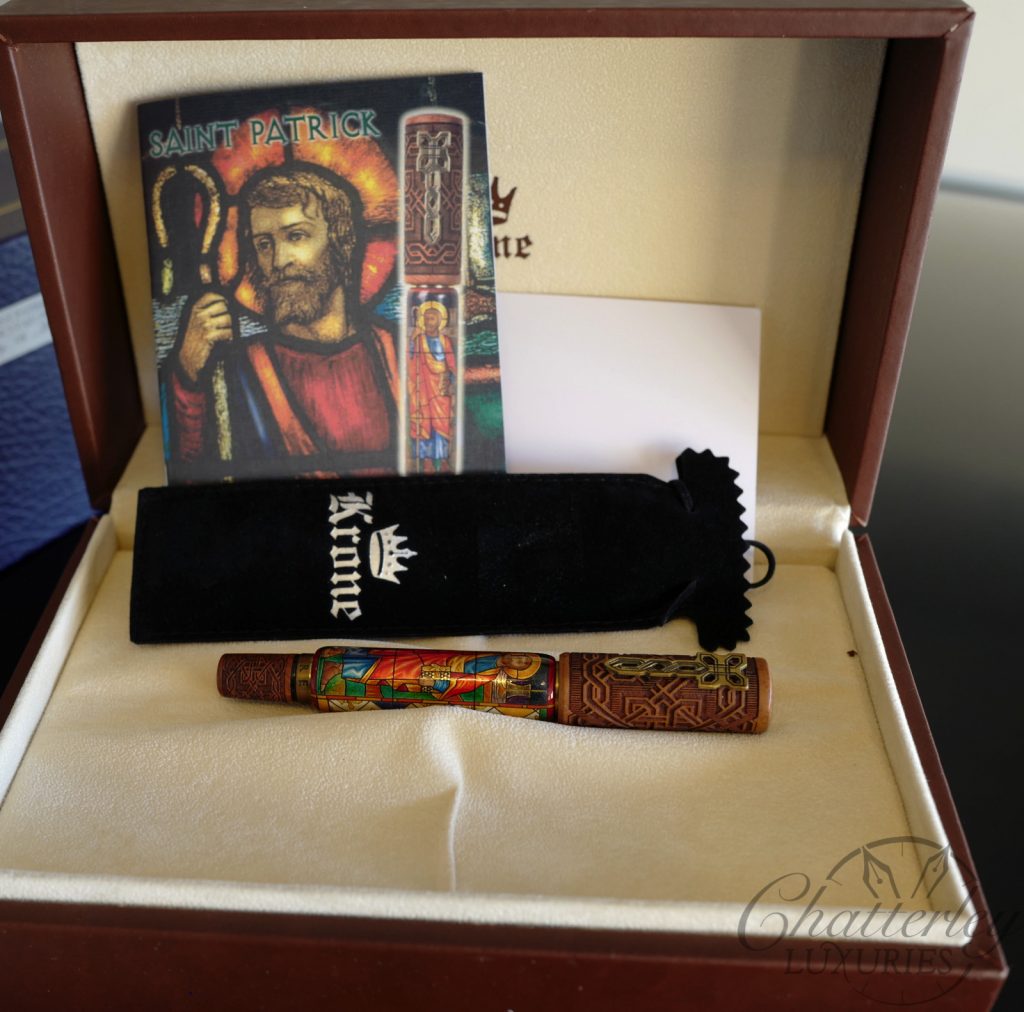 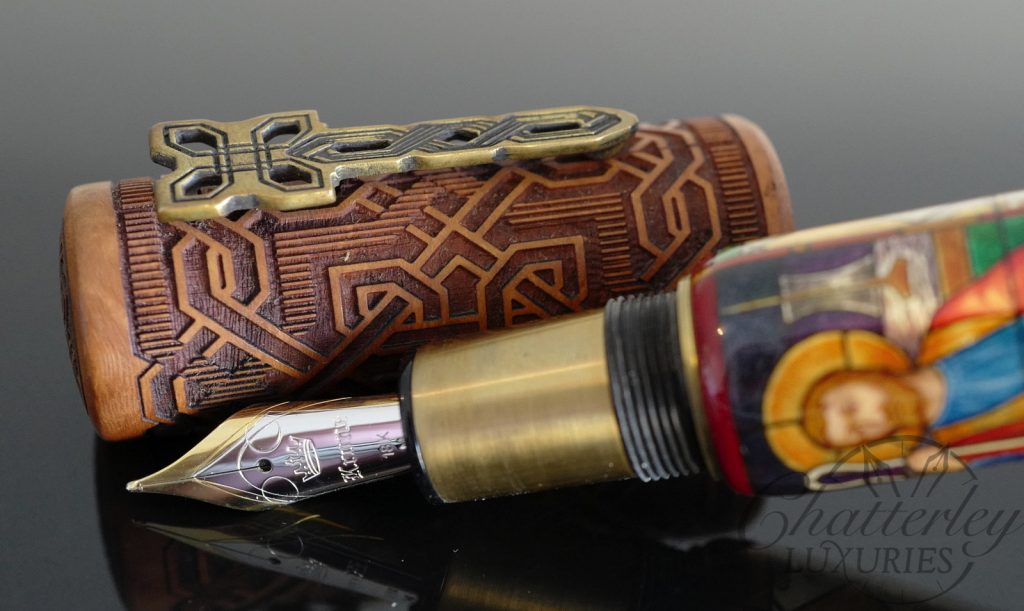 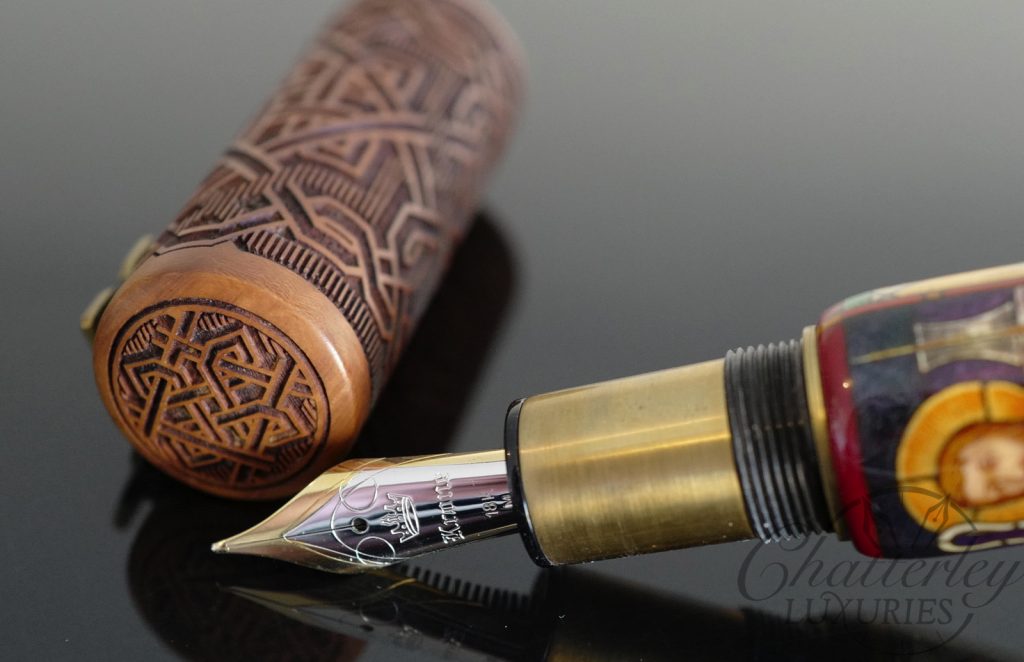 Pagan – a heathen: an unconverted member of a people or nation that does not acknowledge the God of the Bible.     Prior to St. Patrick’s arrival in Ireland to build a Christian Church, his mission was foretold by pagan wizards. There was a fierce heathen king named Logaire who reigned in the Irish capital of Tara. He called upon his two favorite wizards to look into the future with their black arts and this is what they foresaw:   “there would come to be a certain foreign practice, like a kingdom, with some strange and troublesome doctrine; a practice brought from afar across the seas, proclaimed by a few, adopted by many and respected by all; it would overthrow kingdoms, kill kings who resisted, win over great crowds, destroy their gods, and after driving out all the resources of their art it would reign for ever and ever.”   These words were indeed prophetic, for St. Patrick wiped out the worship of idols and established the catholic faith in Christ throughout the country. The defining moment in St. Patrick’s mission came when he challenged King Logaire and his pagan followers on Easter, declaring that the power of their gods were no match for the power of the Christian God. This challenge also coincided with the pagans’ most important festival of the year. In a series of confrontations and contests over two days time, St. Patrick killed both of Logaire’s favorite wizards and reduced the king to a frightened, humiliated mortal.     It is ironic that the patron saint of Ireland, St. Patrick, was in fact a Roman Briton who had a vision that he was to go to Ireland to establish the Christian church. He believed in this mission so passionately that he left his family behind in Britain and forsook any opportunity for a personal life to achieve this goal. His exploits gave rise to the legend of him driving the snakes out of Ireland. This is likely to be a metaphor for the defeat of paganism, as serpent imagery is common in pagan religions and the use of that iconography would have died out with the fall of the heathens. St. Patrick devoted his life to converting the druids and his legacy is a Christian Ireland.

Krone honors Saint Patrick with a magnificent pen. The barrel is a luminescent, brilliantly colored painting over a hand-made barrel; re-creating the glowing stained glass of that time period. The image is of Saint Patrick dressed as a Shepherd. 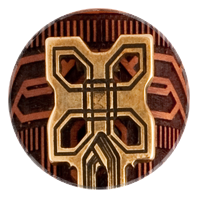 The cap and blind cap are of rich briarwood, which is delicately carved with a Celtic pattern. The antique bronze clip is a unique Celtic symbol, which accents the cap so beautifully. The band at the base of the barrel has the wor “EIRE” which means Ireland in Gaelic. This pen is also available in a magnum size. The cap on the magnum version is also briarwood, however it has two panels with an ornate Celticcross in silver and gold and the other two panels have painted mother of pearl inlays. The barrel of the pen is mother of pearl with the same richly painted picture adorned with gold leaf.

Available in a worldwide Limited Edition of 288 fountain pens.