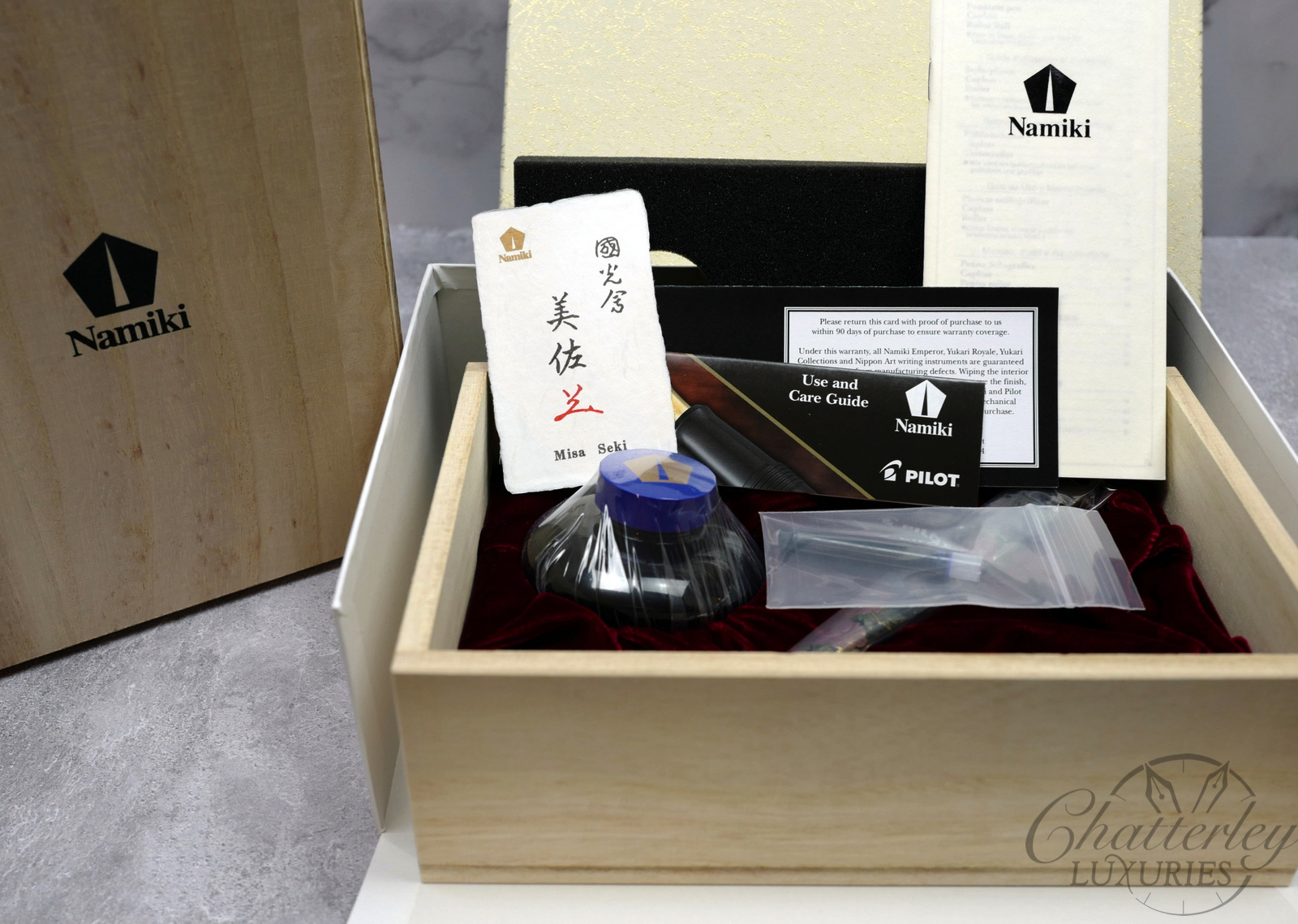 This Namiki Yukari Royale Peony maki-e fountain pen was created in 2021 in Japan by maki-e artisan Misa Seki (美佐). It features the togidashi-taka maki-e technique (burnished-raised maki-e), depicting beautiful peony flowers and blue butterflies with raden inlaid into the wings. The pen has an 18kt gold nib in size #20, fills via cartridge/converter (a CON-70 is included), and comes packaged in a wooden box with a bottle of ink.

A peony plant produces glorious, stunning, large bloomed flowers and the bark of the plant was first harvested for medicinal use in Japan sometime during 500 BC by Buddhist monks. The magnificent beauty of the flower, however, attracted more attention than the medicinal value. Peonies in full bloom have been depicted around the world in elegant artwork and literature since ancient times. Specifically, in Japan there is a traditional discipline for flowers called Hanakotoba, which is translated to mean the “language using flowers.” Hanakotoba is an unspoken form of communication that uses florals for specific expressions of feelings. Peonies denote bravery, regality, and a distinguished presence.

This Yukari Royale fountain pen features the taka maki-e technique for both peonies’ blooms and leaves. Dancing around the peonies are beautiful, royal blue butterflies with raden (iridescent, multifaceted Mother-of- Pearl, which makes each pen unique) specially inlaid in the wings. Butterflies are naturally drawn to these flowers. Both the flowers and the butterflies showcased are expressed through togidashi-taka maki-e techniques (burnished-raised design applying a layer of lacquer, sprinkling gold or silver powder and drying with an additional lacquer layer to fix the powder). The background is the traditional black lacquer accentuated with gold powder.

The Yukari Royale Peony will be a regularly featured item in the Namiki line. Each pen is carefully crafted and painted with the artisan’s signature. Celebrated artisan, Misa Seki (美佐), from the Kokkokai group, designed the Peony to come with a #20 18 karat gold nib with rhodium accents that features the customary Mount Fuji illustration.