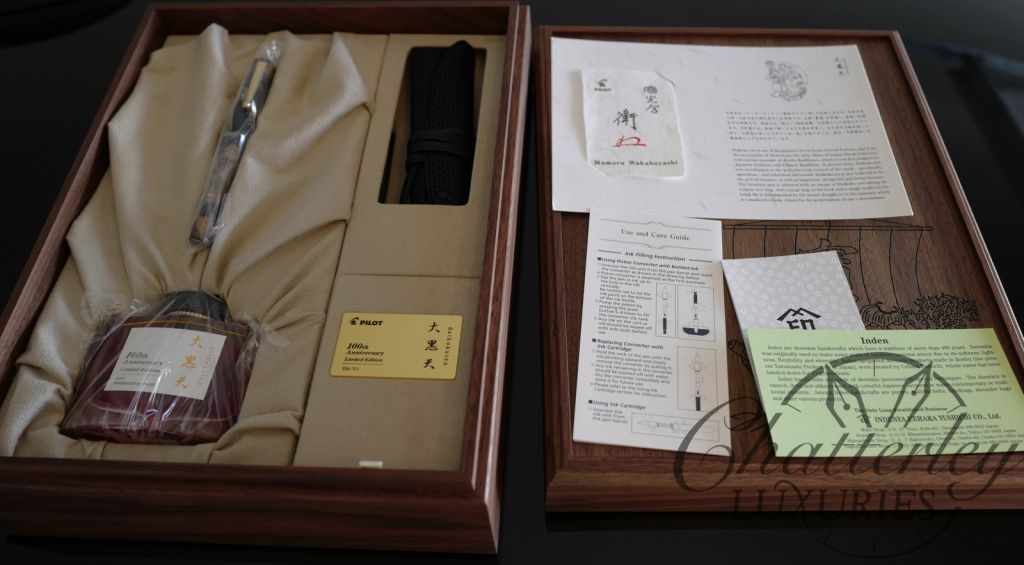 Daikoku-ten is one of the Japanese Seven Gods of Good Fortune, said to be the incarnation of Mahesvara (the deity Shiva of Indian Hindu believers), and a prime example of Ryobu Buddhism, which reconciled indigenous Japanese traditions with Chinese Buddhism. In ancient times, Daikoku-ten was worshipped as the god who took control of the earth – specifically agriculture – and ruled food and wealth. Daikoku-ten is now believed to be the god of treasure, as well as happiness, prosperity and better fortune

The fountain pen is adorned with an image of Daikoku-ten sitting on a straw rice-bag, with a large bag on his back and a magic mallet in his hand. He is accompanied by the mouse thought to be his emissary, which is considered a lucky charm for the perpetuation of one’s descendants.

The yellow ink echoes the color of the straw rice-bag, depicted on the fountain pen, upon which Daikoku-ten is sitting.

This Namiki Seven Gods Yukari fountain pen was produced by Maki-e artisan Mamoru Wakabayashi for Pilot’s 100th anniversary. It features the Togidashi-Taka Maki-e technique, as well as inlaid gold dust. It comes individually packaged in a wooden box with a 50ml bottle of matching limited edition yellow Iroshizuku ink and a leather pen wrap. This exquisitely lacquered brass fountain pen has a medium 18kt gold nib in size #10, is complemented by gold trim, and fills via cartridge/converter. Only 25 limited pens have been produced of each god worldwide.