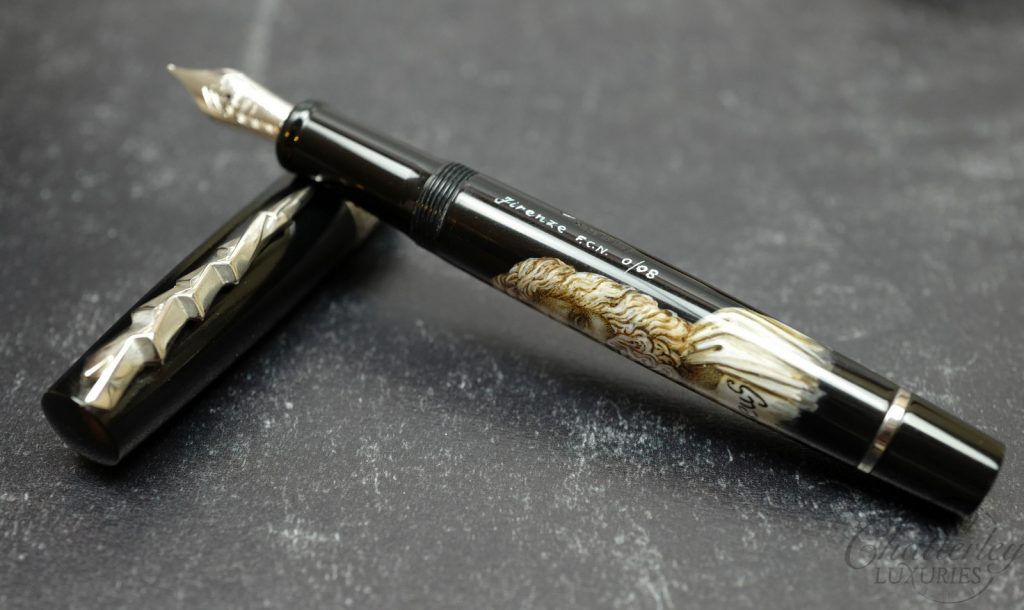 Zeus-The god of the sky, weather, law, order and fate. The supreme god and ruler of Olympus, the home of the Greek gods.

The people of Greece worshipped this idol as their god. A sky god, he controlled lightning, which he uses as a weapon, and thunder.  He is also credited as the father of Greek Heros and the ancestor of many other Greeks.

His usual attributes were a lightning bolt, royal sceptre and eagle. The Lighting bolt is depicted in the clip made from 925 Sterling Silver.

The band of the pen is also made from 925 Sterling silver made in a greek key pattern.

Zeus was depicted as a regal man, mature with sturdy figure and dark beard, and is hand pained on the barrel of this pen.

The paint is water color, same technique as for the ancient middle age parchment books or the current restoration of old paintings.  The miniature is protected from touch by lacquering the surface of the barrel.  The lacquer is very hard and more resistant to scratches than the resin itself.

The Stipula artistic atelier for miniature paintings comprises three people. The miniature master, Franco and two younger ladies, Fulvia and Stefania. Fulvia is Franco’s daughter and Stefania is his student and now artistic partner. The work by hand in a small laboratory 100 m. away from Palazzo Vecchio in the center of Florence. Franco started to miniature paint for galleries and museums (mostly Uffizi in Florence and Vatican museums in Rome) when he was very young under the guide of another Florence master in this technique.

These pens are limited and numbered (painted on the pen) to only 8 pens worldwide. MSRP is $1795

Along with the Sterling Silver trims, they all fill with an in house made piston filler.

They are fitted with a 14k Solid Gold nib. Nib grades are Fine, Medium and Stub.

This pen is available with an Extra Fine, Extra Flexible nib. The nib goes from EF-BB with no problem. The nibs and Feeds have been modified to do this. The flow has also been adjusted. If you have never used a flex nib, its very wise to contact me first to see if a flex nib is for you. These nibs are beautiful to write with and can really add amazing character to your writing style, but the nibs are soft. This means, the room for error is less than a standard nib. And too much pressure, or too much pressure at the wrong angle can bend or spring tines.