This pen is lovingly used and has a Medium nib. It comes complete with box and papers. 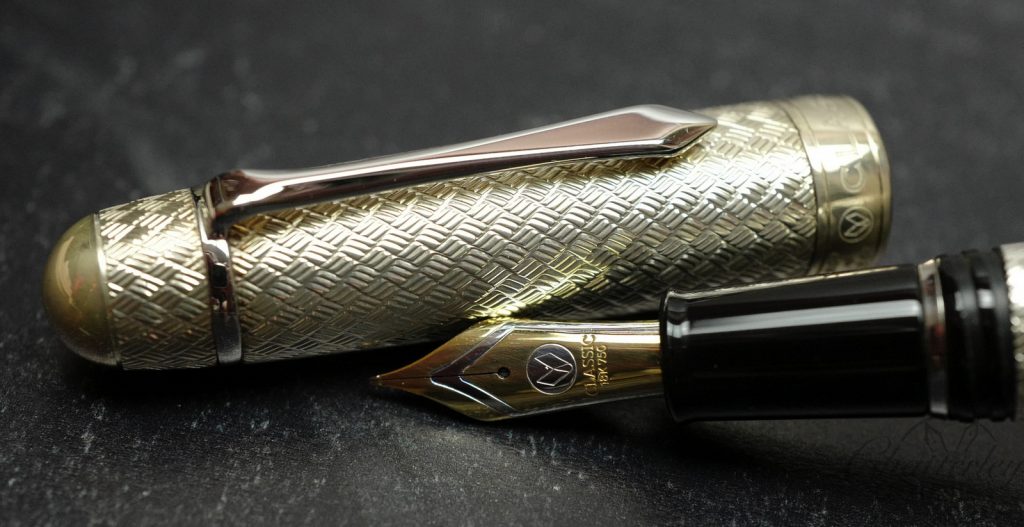 The eighth limited edition in the Classic Pens CP series is the CP8 Murelli Pens Flamme and Vannerie. It is the fruit of the cooperation between Classic Pens, Aquila Brands and Murelli. The series was launched in 2008.

The pens were manufactured in Italy by Aquila Brands to the specification of Classic Pens. The Aquila family is well known and respected in the pen industry for having years of credible reputation as owners and manufacturers of the Montegrappa Brand in the past as well as their current flagship Tibaldi Brand. In particular, they are famed for their sterling silver limited editions.

The CP8 series is named in honor of the Murelli Family. Mr. Robert Murelli, a master craftsman in guilloche engravings, founded the company Murelli R.S.A.R.L. in 1949.

The Murelli Company has established a reputation in working with international pen manufacturers such as Parker, Waterman, Sheaffer, S.T. Dupont, Cartier and others creating, over the years, many exquisite guilloche engravings for fountain pens and lighters.

Nowadays, guilloche engravings can be created with modern, linear engraving machines and computer technology. Despite that, the Murelli family has kept the treasured old machines in impeccable condition and which form a museum of sorts that keeps alive the engraver’s art as well as the Murelli tradition.

The working relationship between Classic Pens and Murelli goes back to 1990 with the CP1 Targa, the first series of the CP Collection. Mr. Robert Murelli was supported by his wife Gilda who worked with him over the years and is an expert engraver. His son Marc Murelli, who inherited the talent of his father, is now the head of the company and with his wife Agnes, a part of the company since the age of sixteen, they are continuing the family tradition.

In observance of the Murelli tradition, the family was enthusiastic in reactivating the machines of earlier eras from their museum to create exquisite engraving designs for the Classic Pens CP Collection, unequalled by today’s modern technology.

Hand engraver 1927. The photo is from a period company brochure. The machine was used in earlier years by Mr. Robert Murelli,  then it became part of the Murelli Museum.

Marc Murelli creating the ZJ1 Mozaique design using the hand engraver from 1927. With his left hand he turns a wheel which facilitates a slow forward movement of another section of the machine which holds the pen part to be engraved. With his right hand, he uses the cutter to engrave the design.

It is paramount to synchronize the turning of the wheel and hence the movement of the pen part, with the cutting of the desired guilloche pattern.

Every pen is engraved completely by hand and therefore it is a little different from the rest and unique.

Circular engraver 1928. This machine was used in earlier years by Mr. Robert Murelli, then it became part of the Murelli Museum.

It was reactivated in 1997, Marc Murelli engraved the CP4 Washington and CP4 Richmond compositions. It was also used in 1999 for the guilloche pattern of the CP5 Vintage.

The machine is operated by electricity and engraves one pen at a time. The pen part (tube) rotates around a fixed cutter which engraves the design. With modern computerized linear engraving machines, the pen part is fixed, the cutter moves forward to make contact and engraves vertically downwards.

Guilloche patterns are determined by cog wheels. The circular engraver has eight cog wheels, each one produces a different pattern. The machine also has a facility to alter the curvature of the pattern. The angle of cut can range from 30 degrees to 90 degrees. The higher the angle, the higher is the curvature of the engraving. The photo above is an original hand drawing by Lenya Lambrou showing Marc Murelli creating the CP4 Richmond pattern with the 1928 circular engraver.

With modern computer technology for linear engraving, machines are programmed and can engrave six pen parts (tubes) at a time. It takes about 15 minutes to complete the engraving. Murelli combines his craftsmanship with modern computer technology to create exquisite engraved compositions for the Classic CP collection. They reflect the most advanced state-of-the-art concepts in contemporary design.

Modern machine for linear engraving coupled with computer technology.  With this machine it is possible to use 5-6 different cog wheels, one at a time, to obtain a range of patterns. With every pattern, the number of engraved lines around the pen body, the angle and depth of cut can vary and these create a wide variety of designs. The Murelli craftsmanship ensures each and every CP design is a unique and exquisite composition.

On this machine, Marc Murelli engraved the guilloche patterns for the CP8 Flamme and the CP8 Vannerie.

The working relationship with Murelli and the time spent in developing the CP collection patterns is an experience Classic Pens will not forget. One is humbled by the Murelli atmosphere of welcome, the willingness and the ability to appreciate the customer’s needs and the passion to strive for perfection with every guilloche pattern they engrave on the world’s most famous pens.

The CP8 Legend Murelli series comprises a total of 500 pens world-wide. Of these 250 are Flamme and 250 are Vannerie.  Customers have the choice of acquiring duets with matching limited edition numbers.

The fountain pens use the converter/cartridge filling system. They are fitted with 18k solid gold, two-tone nibs adorned with the Classic graphics. They sport an elegant cravat shape clip which enables the pen to be carried fashionably in thin or thick material pockets.

The caps are adorned with bold and elegant wide bands and are laser engraved with the Classic and CP8 logos, the name of the pen and its individual limited edition number.