The Sami people, more known as the Lap (Lapp), inhabit the extreme north of the Scandinavian Peninsula and, besides being the only native population in Europe (in Lapland there are traces of Sami going back to the ice Age, approximately 9600 years ago is one of the scarcest.

Today, the total number of Sami is estimated to be about 75,000 of which 20,000 live in Sweden. To be “Lapp” meant to be a person that was a breeder of reindeer, a fisherman and a hunter. The pastures are considered today the more important resource on which the traditional culture stands. For centuries the majority population has had a patronizing attitude towards the Sami, which has affected cultural policy and politics. The current and official policy was adopted in 1963 and is expressed in the Parliamentary Records as follows: “The policy of the national state must be to give the Sami-speaking population the opportunity to preserve its language and other cultural customs on terms that accord with the expressed wishes of the Sami themselves.”

Although the Sami population is not constituted in an independent state, it possesses a representative body, the Sami Parliament; a capital, Karasjok, and their own flag. Limited to only 63 pieces worldwide, the Celebration version offers details in 18 kt solid gold and offers the traditional filling system, the lateral lever. The special limited edition Sami collection includes… a limited release of 963 fountain pens (1KS) in Vermeil (925% sterling silver gold plated) with lateral filling system. The Limited Edition comprises both 1963 fountain pens (1K) and roller balls (R/2) in 925% sterling silver. The rollerball version is easily covertible into a ball pen.

MSRP on the Special Vermeil Fountain Pen is $1365 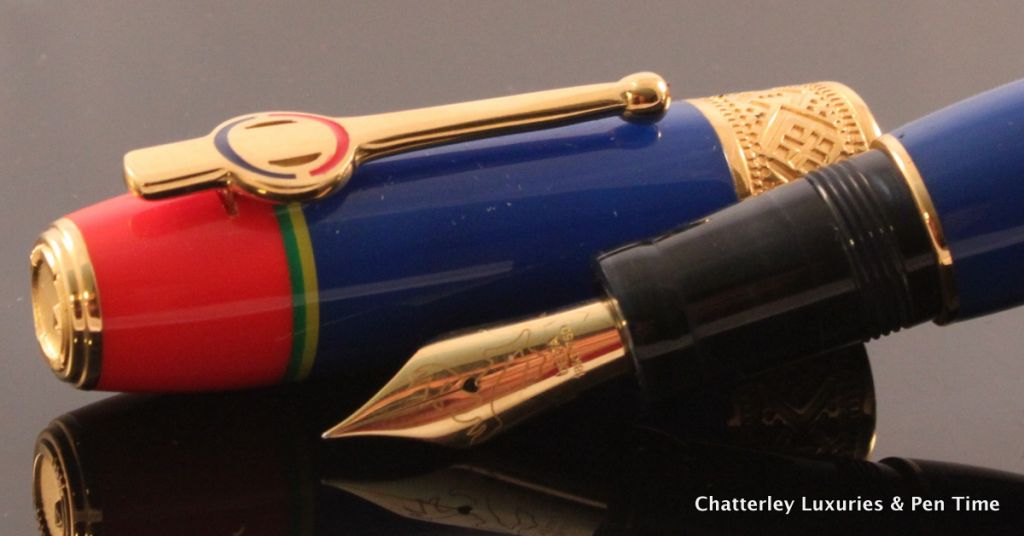