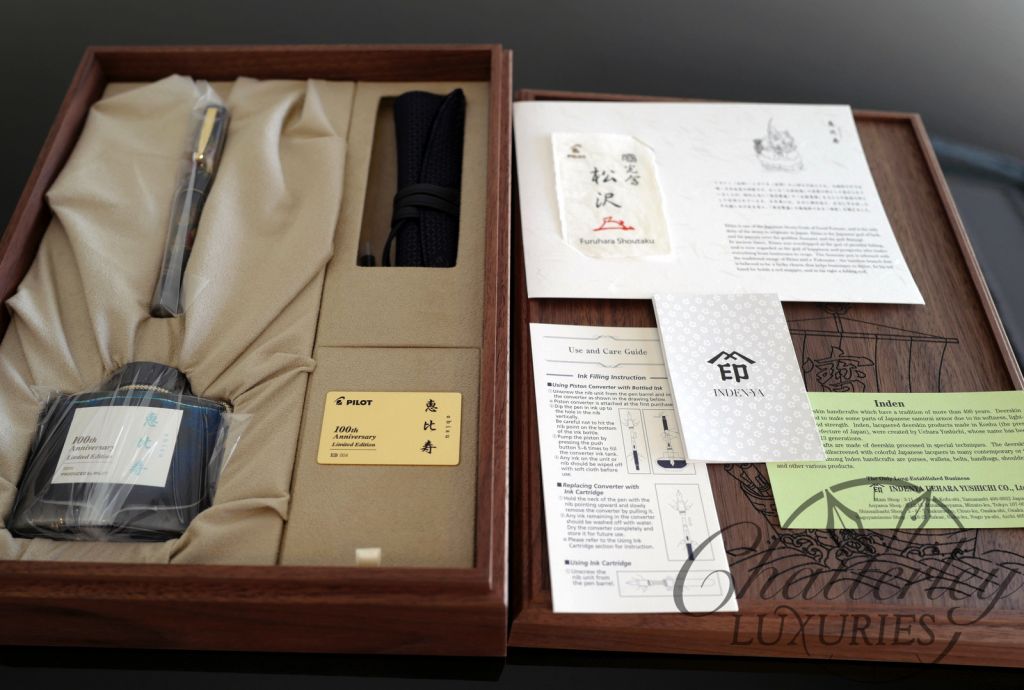 Ebisu is one of the Japanese Seven Gods of Good Fortune, and is the only deity of the seven to originate in Japan. Ebisu is the Japanese god of luck, and his parents were the goddess Izanami and the god Izanagi. In ancient times, Ebisu was worshipped as the god of plentiful fishing, and is now regarded as the god of happiness and prosperity who makes everything from businesses to crops plentiful.

The fountain pen is adorned with the traditional image of Ebisu and a Fukuzasa – the bamboo branch that is believed to be a lucky charm that helps businesses thrive. In his left hand he holds a red snapper, and in his right a fishing rod.

The light blue ink reflects the color of the sparkling sea, depicted on the fountain pen, around the rock on which Ebisu is sitting.

This Namiki Seven Gods Yukari fountain pen was produced by Maki-e artisan Furuhara Shoutaku for Pilot’s 100th anniversary. It features the Togidashi-Taka Maki-e technique, as well as inlaid Raden and gold dust. It comes individually packaged in a wooden box with a 50ml bottle of matching limited edition light blue Iroshizuku ink and a leather pen wrap. This exquisitely lacquered brass fountain pen has a medium 18kt gold nib in size #10, is complemented by gold trim, and fills via cartridge/converter.  Only 25 limited pens have been produced of each god worldwide.