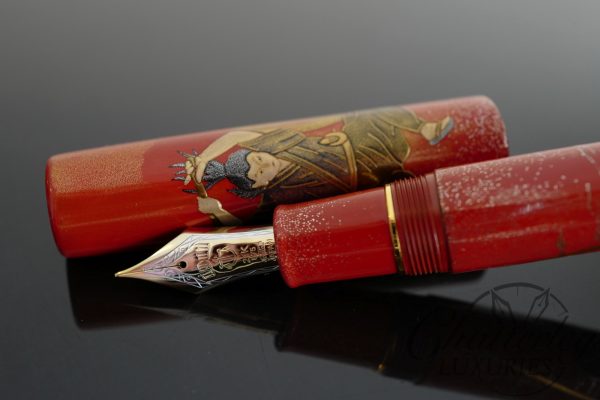 This pen is brand new complete with box and papers. The work is amazing on this masterpiece. 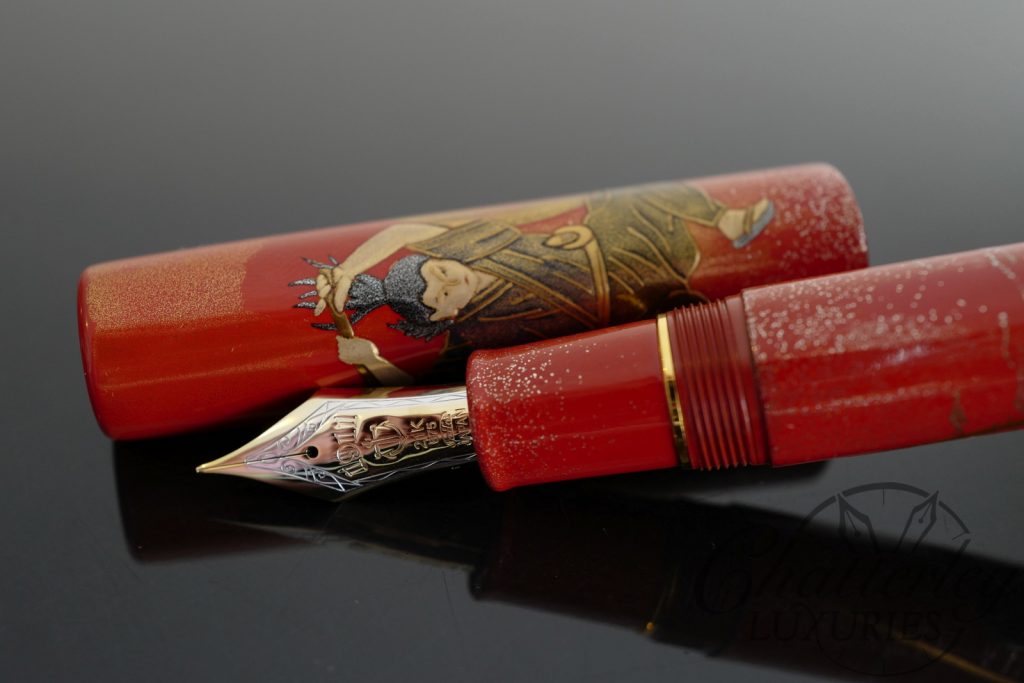 The small island called Ganryu-Jima is famous for Japanese Samurai enthusiasts. The greatest swordsman of all time, Musashi Miyamoto defeated another Samurai legend, Kojiro Sasaki, at Ganryu-Jima. The Battle of Ganryu-Jima is a famous folklore story in Japan.

The original name of the island is Fune-Shima. Ganryu was Kojiro’s nickname. Kojiro Sasaki was highly respected, and his name was given to the island in his honor, even though he was defeated in the battle.

Both Musashi and Kojiro were regarded as mighty Samurai warriors, and both were previously undefeated in battle. The Battle of Ganryu was a fight to determine the strongest Samurai at that time. Musashiis said to have used a special wooden sword (katana) made out of an oar from a boat instead of a real sword. Kojiro had an unusually long blade sword called Monohoshi-Zao.

Kojiro’s fighting style is called ‘Tsubame-Gaeshi.‘ Tsubame means ‘a swallow’ and Gaeshi means ‘a strike to kill.’ Kojiro is reputed to have killed a swallow in flight! This unique style of Tsubame-Gaeshi is characterized by the right hand gripping the sword upside down, allowing the swordsman to fool the opposing warrior that the initial strike downwards was finished, whereas, in reality, the sword was then immediately thrust upwards, surprising the opponent and usually killing them.

The great dual took place on April 13th, 1612. The two Samurai, both in their twenties, had agreed to meet at 8 am at the island, but Musashi arrived two hours late, intentionally, which seriously irritated Kojiro, who shouted, “You are too late,” and drew his sword and angrily threw away his scabbard into the sea. Musashi responded “You have already lost, as, if you were to win, you would need your scabbard later.” Musashi won the battle with one single blow to the head, which killed the samurai legend Kojiro Sasaki.