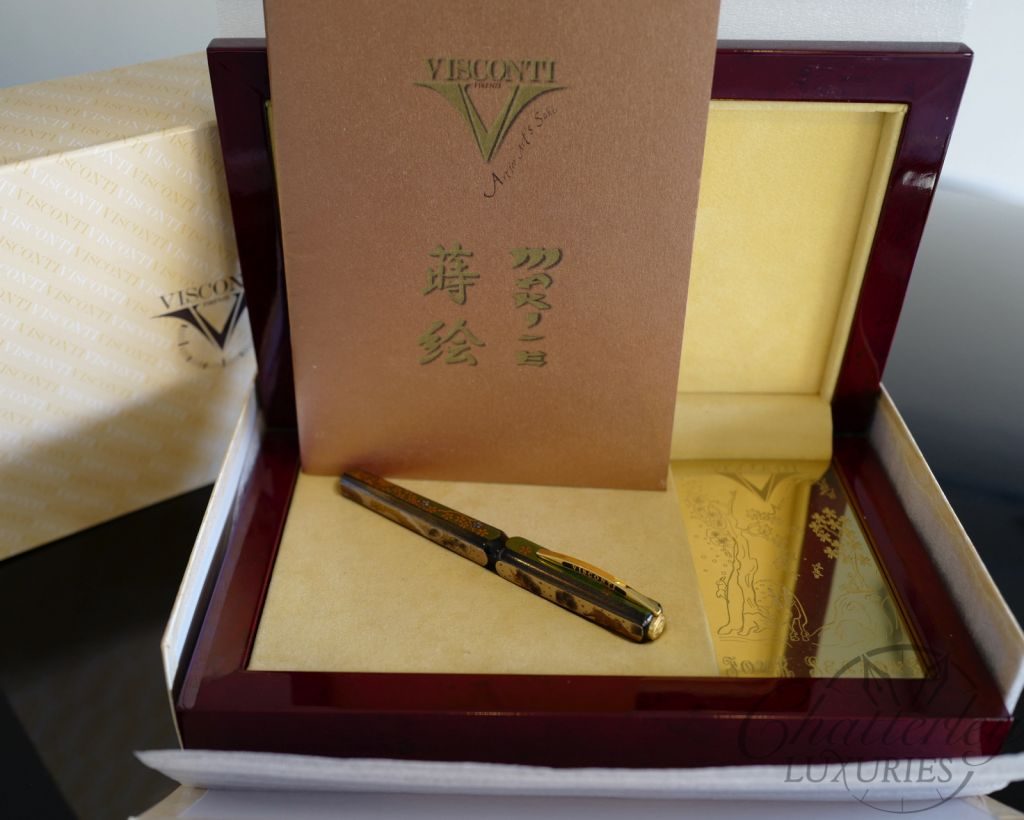 Like the Supernatural Creatures pens, the Four Seasons is one of the Master Oshita’s handwork and Visconti’s technique offsprings.

Back in 1994 Visconti had already celebrated the time’s passage theme with a “Four Seasons” fountain pen collection: it was composed of four different pens, each of them represented a season.

In 2007, after almost twenty years of progress into design and technological research, we made a pen that conveyed much of Visconti’s innovation: “squaring the circle” design, Power Filler system, double reservoir.

On each facet the four seasons are represented by Master Oshita’s wonderful paintings. The drawings were made using a mix of the most difficult to master maki-e techniques. The pen in itself symbolizes time’s passing: there is no beginning, no ending, just the never ending cycle of nature and life itself.

URUSHI AND MAKI-E: ARTS THROUGH CENTURIES

Visconti’s exploration of foreign arts and craftmanship goes back to 1989, when we first released our Urushi fountain pen, a very limited edition: only 100 pieces per year were made, for five years. Urushi laquering is an ancient art whose roots go back through many centuries, maybe millennia.

We will split the topic in two parts. The first, the one you’re reading, is an in-depth analysis of urushi and maki-e technique and history. In the next part we’ll focus on the specific Visconti pens that were crafted in such ways. 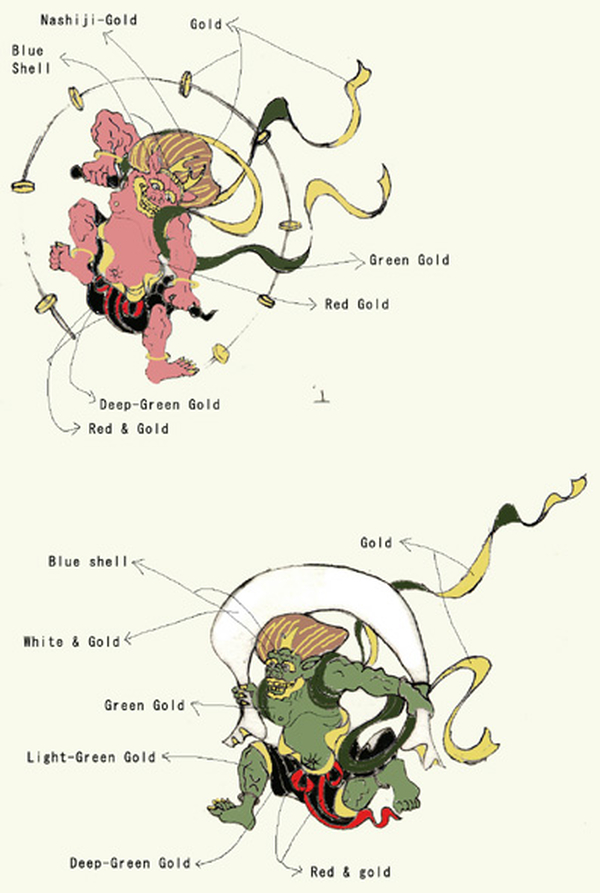 In the Far East, as well as in Western countries, traditional culture is connected to a myth which explains its origins. Japanese “laquer art” corresponds to the following: about 1600 years ago, Yamato Takeru no Mikoto, a member of the Imperial Family who is referred to as the Japanese version of Odysseus, was engrossed day in, day out in the battles for the Japan’s unification.

One day, on a battlefield, he happened to break a branch off a particular tree, whose leaves had turned brightly red.

A beautifully transparent sap began to flow from the spot where the branch had been severed. The prince ordered his retainers to collect the juice. When this was applied to his favourite utensils, it hardened and they began to glow with a sublime radiance.

The Historical Roots of Lacquer Art

Central Asia is said to have been the home of the lacquer tree, indeed the lacquer art has spread out during the centuries, becoming well known also in Japan. Before the unification of Japan,

China had already developed artistic techniques of a higher level since ages. This refined lacquer art came to Japan in the fifth or sixth Century – about at the time of the introduction of Buddhism. No written documentation of masters arriving in Japan during that time can be found, but we can see that there had been contacts with the highly artistic lacquerware masters of the continent, as at that time Japanese lacquer art came into full bloom at a single stroke. Of course, Japanese masters were already familiar with this technique, as we can see by studying their utensils. Thanks to their previous knowledge, it was possible for them to develop lacquer art and this led to the rapid development from a simple technique to the one of first class artistic disciplines for that time. 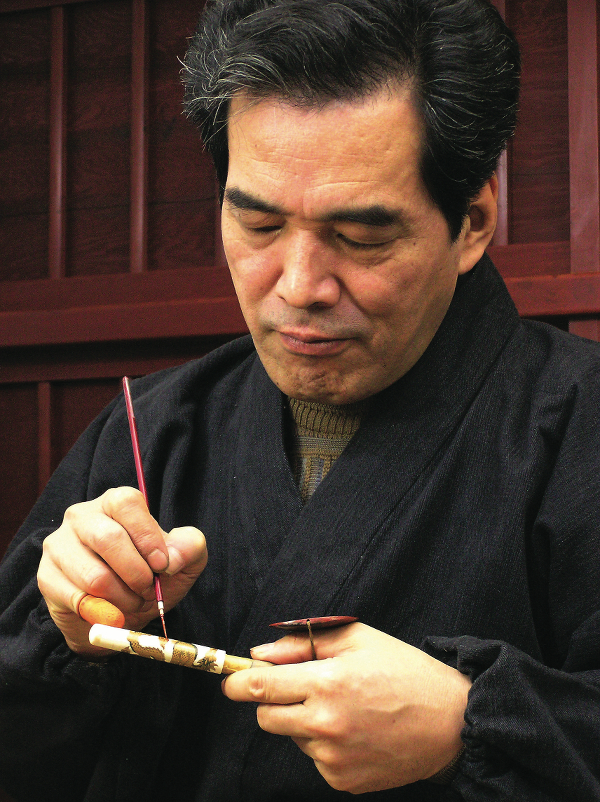 tableland was the precise place of origin. Today the tree is widespread throughout Asia. The lacquer tree is a lovely plant belonging to the cashew family. The tree is about 10 meters high and its leaves turn to a beautiful crimson in autumn. 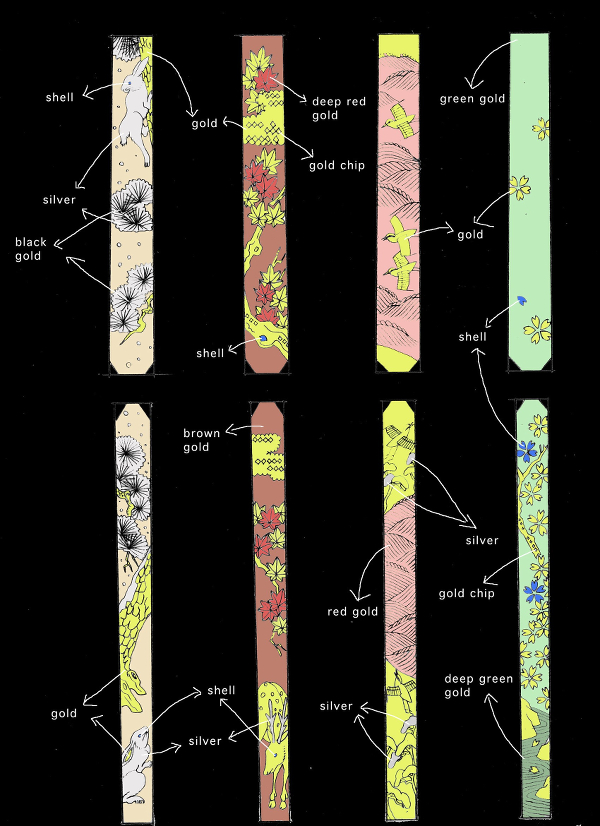 The trunk is greyish white and when it is cut with a knife, a greyish yellow milk-like liquid oozes out from between the bark and the wood. This sap is nothing but crude lacquer. The method of making a cut differs depending on the place. Generally in Japan, five to ten parallel, horizontal, cuts are made and the sap oozing out is scraped and collected. The lacquer sap contains urushiol (C21H32O2) and gum. The higher the urushiol content, the harder is the lacquer after it is applied. Compared with the 50% urushiol and 20% gum content in Chinese, Vietnamese and Thai lacquer, Japanese lacquer contains from 70 to 80% urushiol and 7% gum. This difference in the basic material makes the difference with the other countries and makes Japanese lacquer art able lead the world in this field.

The lacquer juice collected from the tree is called “raw material of lacquer” or “crude lacquer”. Ordinarily “crude lacquer” is the name given to the lacquer after it is filtered and impurities have been removed. Crude lacquer is used as priming for all lacquerware. Kurome is the name given to the process by which the moisture contained in crude lacquer evaporates by heating it at 35 to 45 °C, for this reason resulting lacquer is called “Kurome lacquer”. By heating Kurome-lacquer at 100-150 °C for 30 minutes to one hour (quick-drying procedure), a hardening phase is achieved, whit the material becoming thicker and solid. The ability of this lacquer to harden rapidly a high temperature is particularly suitable for metalwork

and ceramics. In other words, lacquer does not dry from evaporation of moisture or liquids, which make up its composition, but hardens through the simple oxidation of urushiol.

There are various methods of decorating Urushi-ware of which the following are the most important ones: Maki- e (lit. sprinkled pictures; popularly know as the “technique of gold orsilver”). Using this method, all designs are drawn on an Urushi base by sprinkling gold or silver dust over it. The most common kind of Maki- e is accomplished according to the following steps: a base is coated with Urushi lacquer; before the lacquer dries, gold or silver dust is sprinkled on it with a special sprinkler-canister (makizutsu) or brush (kebo); a second coating of Urushi lacquer is laid on this work, and it is finally polished with charcoal or polishing powder.

Some of the most representative types of Maki-e are:

After drawing the design on a Urushi base, gold or silver dust is sprinkled on it; then the surface is rubbed with absorbent cotton soaked in lacquer; and the whole is made lustrous by polishing it with charcoal.

Gold or silver dust is sprinkled on a Urushi base according to the design. After this has dried hard, a final coating of Urushi lacquering is applied. When the final coating is dry, the surface is polished with charcoal till the design appears.

This is a variety of Maki- e in which the design is in relief. It is the most precious type of Maki-e.

The iridescent lining of the shells found at Yaku Island (South of Kyushu) is cut in various patterns. The thinner pieces are pasted directly on the Urushi lacquering, while the thicker ones are set  in the patterns engraved on the basic coating. The design’s covered with a further coating of Urushi, which is finally rubbed off to let it appear.

1887, He started acquiring Maki-e skills, in Kanazawa. The Kanazawa School of Maki-e Art is very famous for its detailed workmanship technique full of variations. 1894, he returned to his home town, Kaga, opened his own workshop, and made a fresh start in the Kaga School of Maki-e Art, to which he left many masterpieces of an uncommon grace. Furthermore he was awarded with prizes at several representative exhibitions of Japanese Arts. His most representative works are exhibited at The Art Museum of ISHIKAWA Prefecture, which is considered the cradle of Urushi & Maki-e Art.

One of Sekkou’s eight pupils, 1915, he opened his own independent workshop meeting Sekkou’s wish, where he trained many young artists and made Kaga School so popular throughout Asia. He concentrated on making from Maki-e a local resource.

Creator and Chairman of the Association of the Maki-e Branch. At the same time he kept also practicing and refining the traditional artistic techniques. In 1977 he was awarded with the First Prize at the Asia Art Exhibition.

He has been awarded prizes at several exhibitions such as “Japan Traditional Urushi Art & Craft”, “Asia Art”, “Ishikawa Art & Craft” etc. Additionally, holding regular one-man shows in Tokyo, Osaka, Nagoya etc. He has won the attention of a broader public. He is famous, not only for his major works “ten-utensils”, but also for his “Netsuke” (objects used to fix the Kimono), fountain pens, accessories etc. He is continuously seeking further developments for Maki-e. 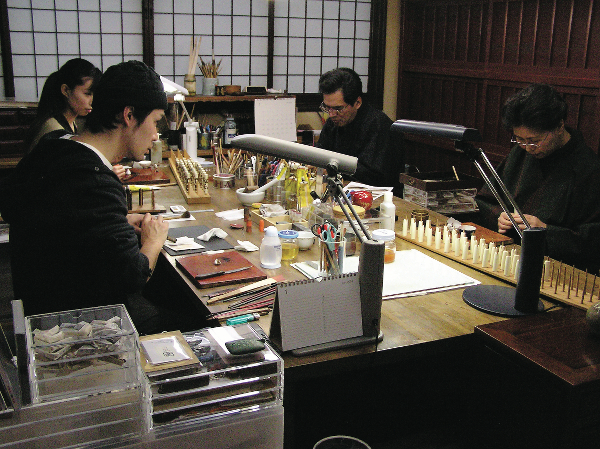